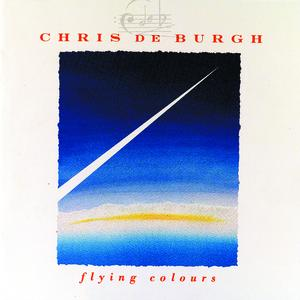 Christopher John Davison (born 15 October 1948), known professionally as Chris de Burgh, is a British-Irish singer-songwriter and instrumentalist. He started out as an art rock performer but subsequently started writing more pop-oriented material. He has had several top 40 hits in the UK and two in the US, but he is more popular in other countries, particularly Norway and Brazil. His 1986 love song The Lady in Red reached number one in several countries. De Burgh has sold over 45 million albums worldwide. De Burgh was born in Venado Tuerto, Argentina, to Colonel Charles John Davison, MBE, a British diplomat, and Maeve Emily de Burgh, an Irish secretary. His maternal grandfather was Sir Eric de Burgh, a British Army officer who had been Chief of the General Staff in India during the Second World War. He took his mother's name, de Burgh, when he began performing. His father had substantial farming interests, and Chris spent much of his early years in Malta, Nigeria and Zaire, as he, his mother and brother accompanied Colonel Davison on his diplomatic and engineering work. The Davisons finally settled in Bargy Castle, County Wexford, Ireland, which was somewhat dilapidated at the time. It was a twelfth-century castle which Eric de Burgh bought in the 1960s. He converted it into a hotel, and the young Chris sang for the guests there. After attending Marlborough College in Wiltshire, England, de Burgh went on to graduate from Trinity College, Dublin, with a Master of Arts degree in French, English and History. Chris de Burgh signed his first contract with A&M Records in 1974, and supported Supertramp on their Crime of the Century tour, building himself a small fan base. His début album, Far Beyond These Castle Walls, was a folk-tinged stab at fantasy in the tradition of the Moody Blues. It failed to chart upon its release in late 1974. A few months later, he released a single called Turning Round from the album, released outside the UK and Ireland as Flying. It failed to make an impression in the UK, but it stayed on top of the Brazilian charts for 17 weeks. This became a familiar pattern for the singer/songwriter, as every one of his 1970s albums failed to chart in the UK or US while they racked up big sales in continental European and South American countries. In 1975 his second album, Spanish Train and Other Stories, was released. Whilst (again) not a huge commercial success, the album and tour expanded the fan base, with de Burgh starting to attract a cult following. Along with the epic title track, other fan favourite tracks from the album included Patricia The Stripper and A Spaceman Came Travelling (the latter released the following year as a single). 1977's third album, At the End of a Perfect Day, whilst well received and featuring both former Fairport Convention drummer Dave Mattacks and later Fairport drummer Gerry Conway, failed to push de Burgh's career significantly, leading to the release of his fourth album Crusader in 1979. Crusader took a more electric direction, including guitar contributions from Ian Bairnson (formerly of Pilot), bass player David Paton (also of Pilot), and drummer Stuart Elliott (formerly of both Cockney Rebel and of Steve Harley and Cockney Rebel), all of whom were also working, at the time, with Kate Bush. The album also featured Sky keyboard player Francis Monkman and Mike Moran. Whilst it attracted a significant number of new fans, Crusader still failed to break through in the UK and US. 1980's Eastern Wind also failed to build further on the (still cult) following in the major territories. In 1981 de Burgh had his first UK chart entry with Best Moves, a collection culled from his early albums. It set the stage for 1982's Rupert Hine produced The Getaway, which reached number 30 in the UK charts and number 43 in the US, thanks to the eerie single Don't Pay the Ferryman. Chris de Burgh's follow-up album, Man on the Line, also performed well, charting at 69 in the US and 11 in the UK. Chris de Burgh had an across-the-board success with the ballad The Lady in Red in late 1986; the single became a number one hit in the UK (number three in America) and its accompanying album, Into the Light, reached number two in the UK (number 25 in the U.S.). That Christmas season, a re-release of de Burgh's 1976 Christmas song A Spaceman Came Travelling became a Top 40 hit in the UK. Flying Colours, his follow-up to Into the Light, entered the British charts at number one upon its 1988 release, yet it failed to make the American charts. De Burgh never hit the US charts again and his commercial fortunes began to slide slightly in Britain in the early 1990s, yet he retained a following around the world. This is mainly due to inactivity of his previous recording label A&M Records UK division in the U.S. In 1997 de Burgh composed a song entitled There's a New Star Up in Heaven Tonight, dedicated to Diana, Princess of Wales. The song was released as a 100-copy limited edition and included on the compilations The Ultimate Collection (2000) and Now and Then (2009). In 2007 a concert in Tehran was planned for mid-2008, together with local band Arian, which would have made Chris de Burgh the first western pop singer to perform in Iran since the 1979 revolution. However, the concert never went ahead because he had not been given permission by the Iranian authorities to perform in the country. He was the first Western act to play in Lebanon after the Lebanese Civil War. On 25 June 2019, The New York Times Magazine listed Chris de Burgh among hundreds of artists whose material was reportedly destroyed in the 2008 Universal fire. Read more on Last.fm. User-contributed text is available under the Creative Commons By-SA License; additional terms may apply.


Carry Me (Like A Fire In Your Heart)
Chris de Burgh