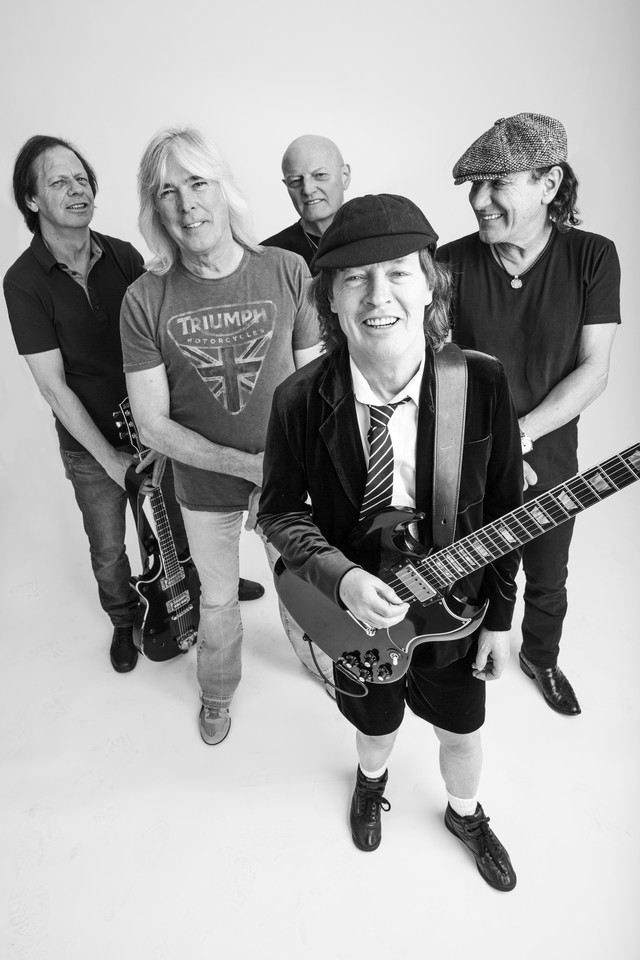 AC/DC is an Australian rock band formed in Sydney, New South Wales, Australia in December 1973 by Angus and Malcolm Young. Their albums have sold in colossal numbers; the total is now estimated at well over 200 million copies worldwide, with the 1980 album Back In Black selling over 21 million in the US alone and 40+ million worldwide, making it, according to statistics, one of the best selling albums in the world, outsold only by Michael Jackson's 'Thriller', and tied with Pink Floyd's 'Dark Side of the Moon'. Their newest album released in 2008 entitled Black Ice is critically acclaimed even ahead of its release. The band has had two distinctive lead singers, and fans tend to divide its history into the Bon Scott era (1974-80) and the Brian Johnson era (1980-present). Most fans will agree that lead guitarist Angus Young (Now living In The Netherlands) is the face of AC/DC, appearing on the cover of most albums. His wild stage antics and schoolboy uniform have made him one of the most loved guitar players of all time. He has the unparalleled ability to captivate an audience of over 50,000 people with just the sounds of his guitar and his facial expressions. Most footage of Angus consists of him either doing Chuck Berry's patented Duck Walk across the stage, or of his mop of hair flying around as he rocks through one of his famous solos. Aside from captivating solos, he has also created some of the most well-known riffs together with his brother Malcolm Young. Bon Scott was the second man to front AC/DC back in 1973 (Dave Evans was the first). He would always smile when he was singing and often made a sideways glance towards a camera if it was there with a grin on his face. Also known for wearing a School Girl outfit with pigtails and smoking a cigarette on their first TV performance, with his duties as lead vocalist, Scott also helped to write many of the band's most popular songs. He was lyrically at his best on such songs as Let There Be Rock and Shot Down in Flames. Sadly, Bon died February 19th 1980 due to alcohol poisoning after a night of heavy drinking in London. It was around this time that AC/DC were starting to get global recognition. The rhythm section of AC/DC included Malcolm Young (rhythm guitar), Cliff Williams (bass) and Phil Rudd (drums). Other drummers include Simon Wright ('83-'89) and Chris Slade ('89-'94). Brian Johnson (earlier in English Heavy rock band Geordie) became the new front man of AC/DC in early 1980 after Bon Scott passed away. Brian is known for always wearing his paperboy cap, a black tank top and blue jeans. He is noted for his distinctive, rough and jagged, yet powerful falsetto style of singing, with a remarkably high range. Well known examples for Johnson's characteristic vocals are found in the songs For Those About to Rock (We Salute You) and You Shook Me All Night Long. With blessings from the Scott family, Brian has been singing his way into fans' hearts for over 25 years. AC/DC are currently on tour as of this writing. You can view the tour schedule at the Official AC/DC Website. Malcolm Mitchell Young (6 January 1953 – 18 November 2017) was an Australian musician and songwriter, best known as a co-founder, rhythm guitarist, backing vocalist and songwriter for the hard rock band AC/DC. Except for a brief absence in 1988, he was with the band from its November 1973 beginning until retiring permanently in 2014, due to health reasons. Young and the other members of AC/DC were inducted into the Rock and Roll Hall of Fame in 2003. Though his younger brother Angus is the more visible of the brothers, Malcolm has been described as the driving force and the leader of the band. He also added that despite his retirement from the band, AC/DC was determined to continue making music with his blessing. As the rhythm guitarist, he was responsible for the broad sweep of the band's sound, developing many of their guitar riffs and co-writing the band's material with Angus. He was married to Linda Young and had two children, Cara and Ross. Young took a leave of absence from AC/DC in April 2014, to receive treatment for dementia. In September 2014, the band's management announced that he would be retiring permanently. Malcolm Young died on 18th of November, 2017, at the age of 64 after a three-year long battle with dementia. Read more on Last.fm. User-contributed text is available under the Creative Commons By-SA License; additional terms may apply.

Back in Black Highway to Hell You Shook Me All Night Long Thunderstruck Hells Bells T.N.T. Shoot to Thrill Have a Drink on Me Dirty Deeds Done Dirt Cheap What Do You Do for Money Honey Let There Be Rock Let Me Put My Love Into You Whole Lotta Rosie Shake a Leg Rock and Roll Ain't Noise Pollution The Jack Who Made Who Jailbreak Touch Too Much High Voltage Girls Got Rhythm It's a Long Way to the Top (If You Wanna Rock 'N' Roll) For Those About to Rock (We Salute You) If You Want Blood (You've Got It) Big Balls Shot Down in Flames Hard as a Rock Moneytalks War Machine Given the Dog a Bone Walk All Over You Big Gun Problem Child Rocker Beating Around the Bush TNT Are You Ready Get It Hot Heatseeker Hell Ain't a Bad Place to Be Rock 'n' Roll Damnation Fire Your Guns Big Jack Live Wire Skies on Fire Stiff Upper Lip Ride On Night Prowler Anything Goes Black Ice