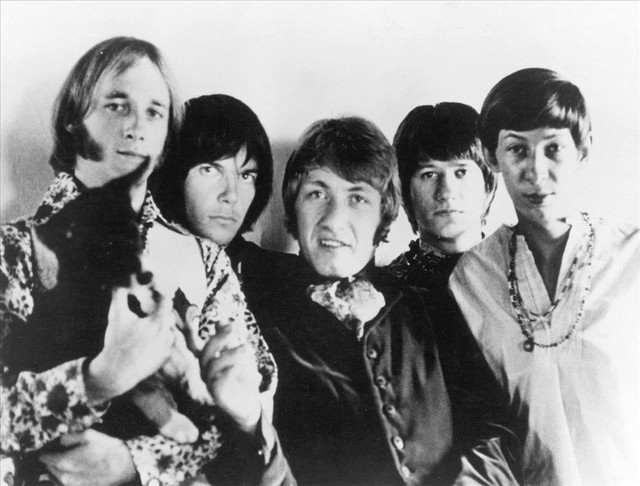 Buffalo Springfield are a folk rock band which formed in 1966 in Los Angeles, California, United States. The band's original lineup consisted of Neil Young (vocals, guitar), Stephen Stills (vocals, guitar), Richie Furay (vocals, guitar), Bruce Palmer (bass) and Dewey Martin (drums). Palmer left the band in 1968 and was replaced by Jim Messina. The band's only Top 40 single, For What It's Worth, was released in 1967. The band split in 1968. Despite lasting for under 25 months, the band was massively influential on many later folk rock and country rock artists and was inducted into the Rock and Roll Hall of Fame in 1997. The band only released three albums in its short life, Buffalo Springfield (1966), Buffalo Springfield Again (1967) and Last Time Around (1968). For What It's Worth, which peaked at #7 in early 1967, was the band's only Top 40 single in the United States. 1967's Rock 'n' Roll Woman came the closest to giving the band a second Top 40 entry, peaking at #44. Stills and Young would go on to perform with David Crosby and Graham Nash in the hugely popular rock act Crosby, Stills, Nash & Young shortly after Buffalo Springfield's demise. Furay and Messina went on to found country-rock group Poco, before Furay embarked on his own solo career. After Messina left Poco, he formed Loggins and Messina with singer/songwriter Kenny Loggins. On October 23 and 24, 2010, Young, Furay and Stills, along with drummer Joe Vitale and Rick Rosas (replacing the deceased Dewey Martin and Bruce Palmer, respectively) reunited for two performances for the Bridge Schools Benefit concert in Mountain View, California. In early 2011, it was announced that original members Neil Young, Richie Furay and Stephen Stills (along with Rosas and Vitale) had scheduled a short West Coast tour for June and one festival gig at the Bonnaroo Art & Music Festival in Manchester, TN . Read more on Last.fm. User-contributed text is available under the Creative Commons By-SA License; additional terms may apply.

For What It's Worth Mr. Soul Bluebird Expecting To Fly Go And Say Goodbye Broken Arrow I Am A Child Nowadays Clancy Can't Even Sing Kind Woman On The Way Home Hot Dusty Roads Sit Down I Think I Love You A Child's Claim to Fame Sit Down, I Think I Love You Flying On The Ground Is Wrong Rock & Roll Woman Everybody's Wrong Out Of My Mind Rock and Roll Woman Burned Pay The Price Do I Have To Come Right Out And Say It Hung Upside Down Leave Sad Memory Good Time Boy Pretty Girl Why Everydays It's So Hard To Wait Questions Uno Mundo Special Care Four Days Gone Merry-Go-Round Carefree Country Day Mr. Soul - Mono The Hour Of Not Quite Rain For What Its Worth For What It's Worth (LP Version) Down to the Wire Kind Woman (LP Version) Stop, Hey What's That Sound For What It's Worth (Live 1967) Kahuna Sunset - Mono Everydays - Live Out Of My Mind - Mono Burned - Mono Nowadays Clancy Can't Even Sing (LP Version) Baby Don't Scold Me I'm Your Kind Of Guy - Originally Unreleased Demo