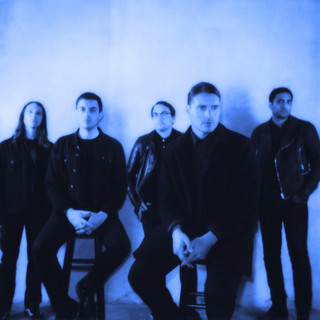 Deafheaven is an American post-black metal band that formed in San Francisco, California on February, 2010. The group began as a two-piece project with George Clarke and Kerry McCoy, who recorded and self-released a demo together. After a warm reception, Deafheaven recruited three new members and began to tour. Before the close of 2010, the band had signed to the Deathwish, Inc. label and later released their debut album Roads to Judah in April, 2011. Their follow-up sophomore Sunbather was released on June 11, 2013 to critical acclaim. After yet another lineup change, the band toured for the album extensively. They also released a single titled From the Kettle onto the Coil on August 25, 2014. The band's third record New Bermuda was released on October 2nd, 2015. Deafheaven formed in February 2010 in San Francisco with vocalist George Clarke and guitarist Kerry McCoy, who previously performed in a grindcore band together. Clarke isn’t sure how he arrived on the name Deafheaven, though he is aware of its appearance in William Shakespeare’s Sonnet 29. The two words ‘deaf’ and ‘heaven’ were combined as an homage to Slowdive. Clarke and McCoy recorded their demo in April, 2010 at Atomic Garden Studios which was released both on cassette tape format in limited quantities and digitally. It featured four songs that combined black metal and post-rock. Originally, Deafheaven did not intend to release the material but they later sent it out to a few of their favorite blogs. After the demo had been positively received, Clarke and McCoy recruited three additional musicians, bassist Derek Prine, guitarists Nick Bassett of the shoegaze bands Whirr and Nothing, and drummer Trevor Deschryver who responded to an ad on Craigslist to form a five-piece group and started playing their first shows on July, 2010. Their debut full-length Roads to Judah was released by Deathwish Inc. on April 26, 2011. As early as September, 2011 Deafheaven announced they had begun writing new music for a potential split album, EP or full-length. At the time, McCoy described it as being faster, darker, heavier and far more experimental than their previous material. However in December, 2012 Clarke described their new material as less melancholic and less centered around only black metal, but rather featuring a more lush and rock-driven, even pop-driven sound at times. Their third album titled Sunbather was written solely by founding members Clarke and McCoy. This was similar to the way the band's first demo was composed, and different from Roads to Judah, which was written as a five-piece band. The duo was also joined in the studio by new drummer Daniel Tracy, who added his own drum style to already-constructed song skeletons. The title of the album reflects Clarke's idea of perfection. He stated that it's meant to represent a wealthy, beautiful, perfect existence that is naturally unattainable and the struggles of having to deal with that reality because of your own faults, relationship troubles, family troubles, death, et cetera. Deafheaven entered the studio to record in January 2013 with Jack Shirley, and released the album on June 11, 2013 through Deathwish Inc. Sunbather was critically acclaimed upon release. Metacritic rated the album 92/100, based on 18 reviews, and later declared it the best-reviewed major album of 2013. It was also Deafheaven's first release to chart on Billboard — it ranked at number 130 on the Billboard 200 and number 2 on the Top Heatseekers chart. In addition to new drummer Daniel Tracy, who was a part of the band for the recording of Sunbather, the band recruited bassist Stephen Clark and guitarist Shiv Mehra for the 2013-2014 tours. Founding members Clarke and McCoy said previous band members parted ways due to difficulties with life on the road and earning little-to-no money. In 2014, the band released the track From the Kettle onto the Coil as a free download for the cable television network Adult Swim's weekly singles series. Their third album, New Bermuda, was released on October 2, 2015, through the ANTI- record label, to critical acclaim. The band started working on the follow up to New Bermuda in January 2018, when they announced they were in the studio working on a new album, scheduled for release later in the year. On April 17, 2018, the band released Honeycomb, the lead single to their fourth studio album Ordinary Corrupt Human Love. On June 12, 2018, a new track from the new album titled Canary Yellow was released.The album was released on July 13, 2018 through Anti- Records. It received widespread acclaim from critics. Their music is described as “a dizzying hybrid of shoegaze shimmer, hardcore punk passion, emo vulnerability, and black metal intensity.” They have cited a wide range of musical influences, including, but not limited to: Morbid Angel, The Smiths, Burzum, Godspeed You! Black Emperor, Orchid, Emperor and My Bloody Valentine. Deafheaven George Clarke - Vocals Kerry McCoy - Guitar Shiv Mehra - Guitar Daniel Tracy - Drums Chrish Johnson - Bass (Live) 2010 - Demo (Remastered in 2012) 2011 - DW Live Series 08: Live at The Blacktop 01.15.11 2011 - Libertine Dissolves (single) 2011 - Roads to Judah 2012 - Deafheaven / Bosse-de-Nage (with Bosse-de-Nage) 2013 - Sunbather 2014 - From the Kettle onto the Coil 2015 - New Bermuda 2018 - Ordinary Corrupt Human Love Read more on Last.fm. User-contributed text is available under the Creative Commons By-SA License; additional terms may apply.