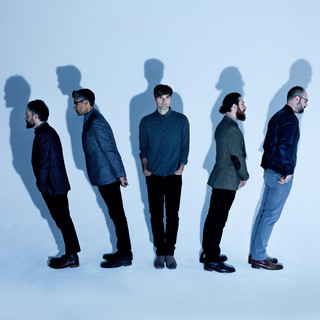 Death Cab for Cutie is an American indie rock band formed in Bellingham, Washington in 1997. The band consists of Ben Gibbard (vocals, guitar, piano), Nicholas Harmer (bass), Jason McGerr (drums), Dave Depper (guitar) and Zac Rae (keyboards). Death Cab began as a solo project of Ben Gibbard, now the band's vocalist and guitarist. Gibbard took the band name from the satirical song Death Cab for Cutie, performed by The Bonzo Dog Band in The Beatles' 1967 experimental film Magical Mystery Tour. As Death Cab for Cutie, Gibbard released a cassette titled You Can Play These Songs with Chords; the release was surprisingly successful, and Gibbard decided to expand the band into a complete project. He recruited Chris Walla (who had also worked on the cassette) as an electric guitarist, Nick Harmer as bass guitarist, and Nathan Good to play drums. The four released the LP Something About Airplanes on August 18th 1998. The album was favorably reviewed in the independent music scene, and in 2000 the band released We Have the Facts and We're Voting Yes. Nathan Good left the band at some point during this album's production. His playing on “The Employment Pages” and “Company Calls Epilogue” were kept, but Gibbard played drums on all other songs. Michael Schorr would first appear on The Forbidden Love E.P., released on October 24, 2000. In 2001, another LP was released, entitled The Photo Album. Limited editions of this album contained three bonus tracks, which were later released separately as The Stability EP. In 2003, there was another change of drummer, with Jason McGerr of Eureka Farm replacing Schorr. McGerr would play drums on the next release, Transatlanticism. Transatlanticism was released in October of 2003. It received critical praise and also became the band's top-selling album, with 225,000 copies sold during its first year out. In spring of 2004, the band recorded a live E.P. titled The John Byrd E.P., named for their sound engineer. The E.P. was released on Barsuk Records in March 2004. In November of 2004, Death Cab for Cutie signed a “long-term worldwide deal” with Atlantic Records, leaving their long-time label Barsuk Records. Gibbard stated on the official website www.deathcabforcutie.com that nothing would change except that “Next to the picture of Barsuk holding a 7, there will be the letter A on both the spine and back of our upcoming albums.” This was a marked change from Gibbard's earlier views on major-label relations, which he said “are set up to fuck you and take all your money.”. After signing to Atlantic, the band was still nervous about corporate economics, and encouraged fans to download its songs from the Internet. The first and second singles off the band's Atlantic Record release Plans were “Soul Meets Body” and “Crooked Teeth”, respectively. The full album was released in August of 2005. Plans was somewhat well-acclaimed by critics and fans, and received a nomination for the Grammy Award for Best Alternative Album of 2005. It achieved Gold Status in 2006 after charting on Billboard for 47 consecutive weeks. The band released a touring DVD titled Drive Well, Sleep Carefully in 2005. Known for their contributions to animal rights, the band is supporting the activist group PETA in giving away copies of the DVD to promote animal rights. In early 2006, the band announced the upcoming release of Directions, eleven short films inspired by songs from the Plans album, each directed by a different person. The videos were posted one at a time at the band's website and the DVD went on sale April 11, 2006. On May 12, 2008 their album, Narrow Stairs, was released and was well received by both critics and fans. It was their first album to reach #1 on the Billboard 200. The album contains the singles I Will Possess Your Heart, Cath... and Grapevine Fires. The band's latest released The Open Door EP, which was released on March 31, 2009. Their main styles consist of slow progressive rock with dark lyrics. The band's seventh album, Codes and Keys, was released on May 31, 2011. The album's first single was You Are A Tourist. On October 11, 2013, the band reportedly began working on their eighth studio album. This was then confirmed by the group's official Instagram profile in which an image was uploaded with the caption DCFC LP8 begins. The new album will be produced by Rich Costey and is expected to be released in early 2015. In an interview with Stereogum, Gibbard said of the new album, I do think from start to finish it's a much better record than Codes And Keys. If that record turned anybody off, I feel pretty strongly that this one could win them back. There are threads in this one that connect back to our earliest stuff that people love. On October 29, 2013, the band released a remastered tenth-anniversary version of their 2003 album Transatlanticism. The new album included a vinyl LP and MP3 download, with demos for all the songs from the album. As part of the 2014 Record Store Day, the band released its first live album, a vinyl-only double LP recorded during various 2012 tour dates with Magik*Magik Orchestra. Included within the packaging was a code for a digital download of the recording. On August 13, 2014, after 17 years as a member of Death Cab for Cutie, guitarist and songwriter Chris Walla decided to part ways with the band, with his last performance occurring on September 13, 2014 at the Rifflandia Music Festival in Victoria, British Columbia. Walla states that he plans to ...continue making music, producing records, and erring on the side of benevolence and beauty whenever possible. When asked in an interview about Walla's involvement in the eighth album, McGerr confirmed that Walla played on everything and has been involved all the way through, even in the mixing. Even though he's played his last show with us, he's still been involved in everything involving this record. Read more on Last.fm. User-contributed text is available under the Creative Commons By-SA License; additional terms may apply.

I Will Follow You Into The Dark Soul Meets Body Crooked Teeth Summer Skin Marching Bands of Manhattan A Lack of Color Your Heart Is an Empty Room The Sound of Settling Transatlanticism Someday You Will Be Loved What Sarah Said Title and Registration Brothers on a Hotel Bed Different Names for the Same Thing I Will Possess Your Heart The New Year Tiny Vessels Stable Song Passenger Seat Lightness We Looked Like Giants Expo '86 Grapevine Fires Death of an Interior Decorator No Sunlight Cath... A Movie Script Ending Bixby Canyon Bridge You Are a Tourist Your New Twin Sized Bed Champagne From a Paper Cup The Ice Is Getting Thinner You Can Do Better Than Me Talking Bird Long Division President of What? Pity and Fear Photobooth We Laugh Indoors Steadier Footing I Was a Kaleidoscope Blacking Out the Friction Bend to Squares Pictures in an Exhibition Why You'd Want to Live Here Styrofoam Plates Coney Island Information Travels Faster 405 Amputations