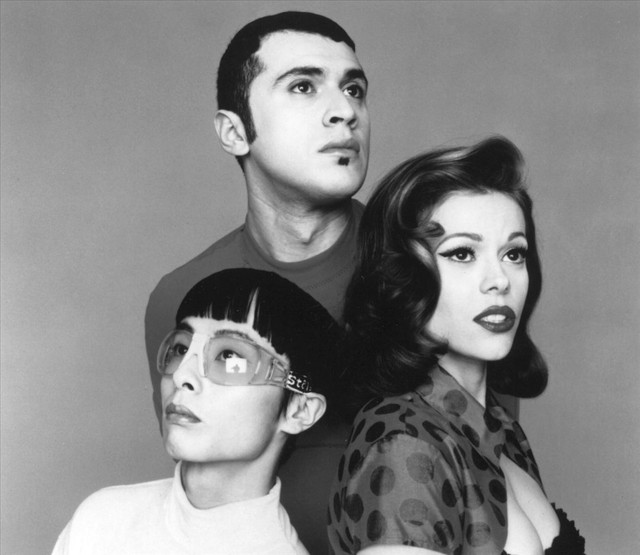 Deee-Lite was a dance music group formed in 1986 in Williamsburg, Brooklyn and playing in NYC fusing house music, hip-hop, funk and techno- before there was a word for techno. Lady Miss Kier named their production company "Sampladelic" and described their music as holographic techno-soul. They were dedicated to outrageous live shows handing out daisies, projecting Captain Whizzo's psychedelic lightshow, employing voguers and other free-styling club dancers as opposed to rigid formation choreography, and injecting a healthy dose of humor and thought provoking socially conscious lyrics. Their most successful hit was Groove Is In the Heart from their 1990 debut, World Clique. With a psychedelic video that was a success worldwide, the song also featured appearances by Q-Tip (from A Tribe Called Quest) and Bootsy Collins. Kier and Dmitry were committed to live performances and toured worldwide with several P-funk luminaries such as Bootsy Collins, Bernie Worrell, Fred Wessely, Gary "Mudbone" Cooper, Mike "kid funkadelic" Hampton and others. Tei appeared in only a handful of live shows. The original members of Deee-lite were: * Supa DJ Dmitry (Dmitri Brill, born 4 June 1964, originally from Kiev, Ukraine) * Lady Miss Kier (Kierin Magenta Kirby, born 15 August 1963, Youngstown, Ohio) * Towa Tei (Dong-hwa Chung, born 7 September 1964, originally from Tokyo, Japan) Brill and Kirby had an ongoing romantic relationship, which ended prior to the release of their third album, Dewdrops In the Garden. Also prior to that release, Tei went in a different musical direction embracing bossa nova as opposed to break beats (appearing only on the remix for "Call Me") while a new member was brought in, DJ On-E. Deee-Lite disbanded in 1994, just before the release of Dewdrops in the Garden. Read more on Last.fm. User-contributed text is available under the Creative Commons By-SA License; additional terms may apply.

Groove Is in the Heart Power Of Love Good Beat Deee-Lite Theme What Is Love? E.S.P. Who Was That? World Clique Runaway Mind Melt Call Me Smile On Deep Ending Build the Bridge Pussycat Meow Bittersweet Loving Say Ahhh... Apple Juice Kissing Heart Be Still Picnic in the Summertime Try Me On...I'm Very You Stay in Bed, Forget the Rest I Had a Dream I Was Falling Through a Hole in the Ozone Layer Music Selector Is The Soul Reflector Bring Me Your Love I Won't Give Up Somebody Try Me On... I'm Very You Love Is Everything You Sexy Thing Party Happening People River of Freedom Groove Is in the Heart [1990] Frenchapella When You Told Me You Loved Me What is love Vote, Baby, Vote Sampladelic Electric Shock Groove Is In The Heart - Remix Version Goodbeatapella How Do You Say...Love Two Clouds Above Nine Thank You Everyday I.F.O. (Identified Flying Object) Rubber Lover Groove Is in the Heart (LP version) DMT (Dance Music Trance) Fuddy Duddy Judge Come On In, The Dreams Are Fine