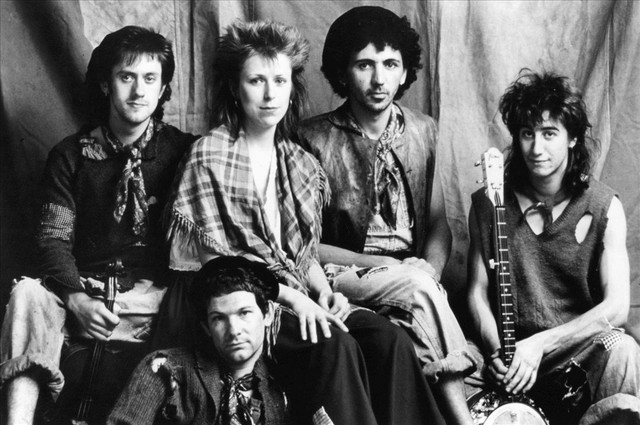 Dexys Midnight Runners - the name consistently spelled without an apostrophe - were a British Post-punk and Northern Soul band who achieved their major success in the early to mid 1980s. The word Dexys in this case, comes from a colloquialism of dextroamphetamine or purple hearts, a type of amphetamine diet pill that was a popular upper drug with England's Northern Soul scene in the 1960s. Founded by former singer of the Killjoys, Kevin Rowland and guitarist Kevin Al Archer, in Birmingham (UK) 1978. The band name was taken from a colloquialism for dextroamphetamine (ie, dexies or dexys), a drug commonly abused by the UK's Mod/Northern Soul scenes of the 1960s. The band, especially at its beginnings, was unique in that musically, they seemed best suited to the budding Mod/Skinhead Revival scene in the United Kingdom, but in many ways, especially fashion, they came off as rather hard to sell to any particular scene. Musically, they've always been a sort of soul-fusion. An early single, Geno (written as an ode to American Northern Soul singer, Geno Washington), was immensely popular, despite being repeatedly bad-mouthed by the NME. In fact, Geno remains their biggest-selling single in the UK, thanks in part to at least one re-issue. The following album, Searching for the Young Soul Rebels (1980), was an interesting punk and soul fusion, and despite (or perhaps because of) decidedly mixed reviews by the press, it was extremely well-recieved by the public. Their second album, Too-Rye-Aye (1982), had a decidedly different sound, thanks largely to an immense line-up change, most notable for the fact that the horn section of ...Young Soul Rebels had been replaced by the Emerald Express, the band's Celtic folk section (featuring violinist Helen O'Hara). The sound was still obviously soul influenced, at the very least, but this time it was Celtic soul. The album's first UK single was even titled Celtic Soul Brothers. Too-Rye-Aye was the most popular Dexys album Stateside, in fact it was the only one to break US charts, (though the album itself was only a modest to intermediate success in the US). This is largely because the US a-side single for Come On Eileen was debatably too popular (the single has been re-issued at least once in the UK; despite this, Geno was still their biggest-selling UK single). Undoubtedly the most pop radio-oriented song of the entire Dexys Midnight Runners catalogue. A third album, Don't Stand Me Down was released in 1985 ending a three year silence from the band. It featured a noticeably different line-up. The ever-experimental Rowland abandoned the Too-Rye-Ay Celtic Soul/New Wave formula in favor of a more laidback Van Morrison conversational album. The previous album was a Big Band sound when compared to the new one (though, amusingly, the number of guest musicians featured on Don't Stand Me Down, plus the credited band members, seemed to outnumber all previous members of Dexys combined, including ex-Dexys who had recorded only song before leaving). Don't Stand Me Down was well-received by critics though universally ignored by the music-buying public due in large part to Rowland stubbornly refusing to release any song from the album as a single, until considerably late after its release, as well as confusing listeners who may have been expecting a sequel to Too-Rye-Ay's Dance Pop. Sales of the album were sparse and it was considered a failure by the label. In the 20-plus years since it's original release it has come to be viewed by many as Rowland's magnum opus. After Rowland's first solo endeavor in 1988, Dexys was briefly reformed in 1993, by Rowland with Big Jim Patterson, though this endeavor resulted in little, if anything more than a television performance. In 2003, the career retrospective album ('don't call it a greatest hits collection'), Let's Make This Precious was released, featuring two new tracks, Manhood and My Life In England, Part One. The new tracks were touted as singles and received regular radio play in the UK, though never commercially released outside the album. Rowland officially announced in June 2005 that Dexys were back in the studio, recording and seeking a new contract. The current line-up includes Rowland Mick Talbot (former member of Merton Parkas and Hammond player for Paul Weller). In the book 1001 Albums You Must Hear Before You Die, notably, Dexys Midnight Runners are the only band to have all of their albums listed, and with a full page review for each album (understandably, most albums only get a half-page review). All three albums received glowing reviews, save Too-Rye-Aye, wherein it was noted [[i]Too-Rye-Aye] is the worst of the three Dexys albums; but if this is the worst album in your collection, pat yourself on the back. Read more on Last.fm. User-contributed text is available under the Creative Commons By-SA License; additional terms may apply.

Come on Eileen Geno Come On Eileen - Single Edit Jackie Wilson Said (I'm in Heaven When You Smile) Come On Eileen - Album Edit Plan B Let's Make This Precious Seven Days Too Long Tell Me When My Light Turns Green Burn it Down Liars A to E Old I'm Just Looking The Celtic Soul Brothers Thankfully Not Living in Yorkshire It Doesn't Apply There There My Dear The Celtic Soul Brothers (More, Please, Thank You) Jackie Wilson Said Keep It Geno - 2000 Remastered Version The Teams That Meet In Caffs Show Me All In All (This One Last Wild Waltz) I'll Show You Until I Believe In My Soul There, There, My Dear Love Part One Dubious Geno - 2000 - Remaster This Is What She's Like Geno - 2000 Remaster I Couldn't Help If I Tried Come On Eileen [April 1983] I Couldn't Help It If I Tried Because of You Dance Stance One of Those Things Breaking Down the Walls of Heartache T.S.O.P. Come On Eileen (Single Edit) The Occasional Flicker Come On Eileen - BBC In Concert - Newcastle 26/06/82 I Love You (Listen to This) There There My Dear - 2000 Remastered Version Soul Finger The Waltz My National Pride Tell Me When My Light Turns Green - 2000 Remastered Version there, there my dear One Way Love