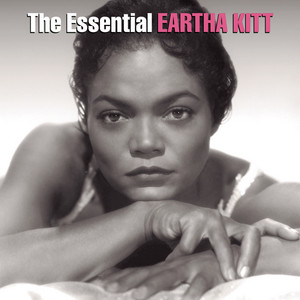 Eartha Mae Kitt (January 17, 1927 - December 25, 2008), was an American actress, singer, and cabaret star. She was perhaps best known for her 1953 Christmas song Santa Baby. Orson Welles once called her the most exciting woman in the world. She took on the role of Catwoman for the fourth season of the 1960s Batman TV series, replacing Julie Newmar who was unavailable for the final series. Born in tiny North, South Carolina to Mamie Kitt, who was of Cherokee and African-American descent, and an American father (surname Kitt) of German and Dutch descent, she was raised by her maternal aunt Anna Mae Riley, whom she believed was her mother up until after Riley's death, when she was sent to live in New York City with her real mother. Kitt began her career as a member of the Katherine Dunham Company and made her film debut with them in Casbah (1948). A talented singer with a distinctive voice, her hits include Let's Do It, C'est Si Bon (It's So Good), Just an Old Fashioned Girl, Monotonous, Love for Sale, I'd Rather Be Burned as a Witch, Uska Dara, Mink, Schmink, Under the Bridges of Paris, and arguably her most recognizable hit, the sexily sung Christmas song Santa Baby. She sang quite a few songs in French, a language she picked up during her years performing in Europe, but she never lost her American accent, which made her French songs sound rather amusing to native French speakers. She dabbled in other languages as well, which she demonstrated in many of the live recordings of her cabaret performances. In 1950, Orson Welles gave her her first starring role, as Helen of Troy in his staging of Dr. Faustus. A few years later, she was cast in the revue New Faces of 1952, introducing Monotonous, C'est Si Bon and Santa Baby, three songs with which she continues to be identified. During her run, 20th Century Fox filmed a version of the play. Welles and Kitt allegedly had a torrid affair during her run in Shinbone Alley, which earned her the nickname by Welles as the most exciting woman in the world. In 1958, Kitt made her feature film debut opposite Sidney Poitier in The Mark of the Hawk. Throughout the rest of the 1950s and early 1960s, Kitt would work on and off in film, television and on nightclub stages. In the late 1960s television series Batman, she played Catwoman after Julie Newmar left the role. This was the role for which she would best be remembered, owing to her purring feline drawl. In 1968, however, Kitt encountered a substantial professional setback after she made anti-war statements during a White House luncheon that reportedly made First Lady Lady Bird Johnson weep uncontrollably. Professionally exiled from the U.S., she devoted her energies to overseas performances before returning to New York in a triumphant turn in the Broadway spectacle Timbuktu! (a version of the perennial Kismet set in Africa) in 1978. In the musical, one song gives a 'recipe' for mahoun, a preparation of cannabis, in which her sultry purring rendition of the refrain constantly stirring with a long wooden spoon was distinctive. In 1984, she returned to hit music with a dance song, Where Is My Man; the first certified Gold record of her career. Kitt found new audiences in nightclubs across the country, including a whole new generation of gay male fans, and she responded by frequently giving benefit performances in support of HIV/AIDS organizations. In 2000, Kitt again returned to Broadway in the short but notable run of the revival of the 1920s-themed, The Wild Party, opposite Mandy Patinkin and Toni Collette. In 2003, she replaced Chita Rivera in Nine. In recent years she had also appeared as the Wicked Witch in the North American national touring company of The Wizard of Oz. One of her more unusual roles was as Kaa the python in a 1994 BBC Radio adaptation of The Jungle Book. Kitt lent her distinctive voice to the role of Yzma in Disney's The Emperor's New Groove and also did other voiceover work such as the voice of Queen Vexus on the animated TV series My Life as a Teenage Robot. She continued her role as Yzma on the spin-off TV series of The Emperor's New Groove, The Emperor's New School. In recent years, Kitt's annual appearances in New York made her a fixture of the Manhattan cabaret scene. She took the stage at venues such as the Ballroom and, more recently, the Café Carlyle to explore and define her highly stylized image, alternating between signature songs (such as Old Fashioned Millionaire), which emphasized a witty, mercenary world-weariness, and less familiar repertoire, much of which she performed with an unexpected ferocity and bite that presented her as a survivor with a seemingly bottomless reservoir of resilience - her version of Here's to Life, frequently used as a closing number, was a sterling example of the latter. This side of her later performances is reflected in at least one of her recordings, Thinking Jazz, which preserves a series of performances with a small jazz combo that took place in the early 1990s in Germany, and which includes both standards (Smoke Gets in Your Eyes) and numbers (such as Something May Go Wrong) that seem more specifically tailored to her talents; one version of the CD includes as bonus performances a fierce, angry Yesterdays and a live take of C'est Si Bon that good-humoredly satirizes her sex-kitten persona. Personal life Kitt was married to John William McDonald, an associate of a real-estate investment company, from 1960 to 1965. They had one child, a daughter, Kitt (b. 1962, married Charles Lawrence Shapiro); and two grandchildren, Jason and Rachel Shapiro. Eartha Kitt died of colon cancer on Christmas Day, December 25, 2008. Read more on Last.fm. User-contributed text is available under the Creative Commons By-SA License; additional terms may apply.

Santa Baby C'est Si Bon I Want to Be Evil Je Cherche un Homme Santa Baby (with Henri René & His Orchestra) Angelitos Negros My Heart Belongs to Daddy Santa Baby - Remastered Let's Do It Smoke Gets in Your Eyes Je Cherche Un Homme (I Want a Man) Under the Bridges of Paris C'est si bon (It's So Good) Just an Old Fashioned Girl Where Is My Man Lilac Wine Santa Baby - Remastered 2001 The Girl From Ipanema Monotonous Uska Dara St. Louis Blues Lullaby of Birdland The Heel Mambo De Paree Careless Love Lovin' Spree Let's Do It (Let's Fall in Love) Beale Street Blues This Is My Life African Lullaby Lazy Afternoon Hey Jacque Thursday's Child Uska Dara - a Turkish Tale Apres Moi Mademoiselle Kitt Santa Baby - Edit My Heart Belongs To Daddy (From Leave It To Me) Love for Sale I Want To Be Evil - Remastered 2001 I Wantcha Around A Woman Wouldn't Be a Woman Let's Do It (From Paris) Avril Au Portugal Moon River Santa Baby (Remastered) Mountain High, Valley Low This Year's Santa Baby Nobody Taught Me Somebody Bad Stole De Wedding Bell