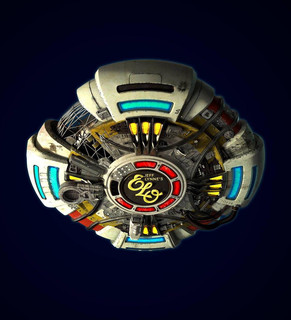 Electric Light Orchestra were a symphonic rock band which formed in Birmingham, England in 1970. The band was formed by Jeff Lynne (vocals, guitar, multiple instruments), Roy Wood (multiple instruments, vocals), Richard Tandy (keyboards, vocals) and Bev Bevan (drums). Lynne, Wood and Bevan were former members of the psychedelic rock band The Move. The band's lineup would fluctuate throughout its original incarnation, although Lynne, Tandy and Bevan would remain constant members. They incorporated the sounds of string ensembles, vocoders and dub echos into rock songs, thereby creating a very sophisticated studio version of rock. The musical content of ELO songs often went far beyond usual chord structures, mixing pop songwriting with classical romanticism and synthesized sounds. The band claim that their music picks up where The Beatles' 1967 song I Am the Walrus left off. Formed in 1970 by Roy Wood, Jeff Lynne and Bev Bevan (the remaining members of the 1960s rock group The Move). The band used cellos, violin, horns and woodwinds to give their music a classical sound. This was an idea Roy Wood initially had while with The Move, to take rock music in a new direction. In 1970 when Carl Wayne left the The Move, Jeff Lynne, front man with fellow Brum band Idle Race, responded to Wood's second invitation to join the line-up, with the lure of starting the new band. To help finance the fledgling project, two more Move albums were released during the recording of their eponymous first album in 1971 which produced the UK hit 10538 Overture. In the US this album was released with the mistaken title of No Answer, due to a mix-up with an uncompleted telephone call to the American label and subsequent secretarial message. However, tensions soon surfaced between Roy Wood and Jeff Lynne. With most of the media attention focused on Roy Wood, differences in musical direction, and a disastrous first live outing, it was no surprise when the band went through the first of its many line-up changes as Wood took Hugh McDowell and Bill Hunt with him to form Wizzard. Despite the music press's predictions that the band would fold without Wood, Jeff Lynne stepped up to lead the band, with Bevan remaining on drums, bassist Richard Tandy switching to moog synthesizer, Michael d'Albuquerque on bass, Mike Edwards, Colin Walker (cello) and Wilfred Gibson replacing Steve Woolam on violin. They released ELO 2 in 1973, from which came their first U.S. chart hit, a hugely elaborate version of the Chuck Berry classic Roll Over Beethoven. After their second album, violinist Gibson was dismissed and replaced by Mik Kaminski. They also released On The Third Day in 1973, with Mike Edwards playing all the cello parts due to Colin Walker leaving the band. Later that same year saw the return of Hugh McDowell, who had jumped ship the year previous, to replace cellist Colin Walker. In 1974 Lynne hired a thirty-piece orchestra, choir and Louis Clark, then began work on the next LP Eldorado, A Symphony, a concept album about dreams, scoring their first U.S. Top Ten hit with Can't Get It Out Of My Head in 1975. Eldorado would become ELO's first gold album. After the release of Eldorado, bassist and vocalist Kelly Groucutt and cellist Melvyn Gale joined, replacing de Albuquerque and Edwards respectively. The band split in 1983. In 1985, Lynne, Tandy and Bevan reunited and recorded the album Balance of Power. This reunion was short lived and the band split once more in 1986. Bev Bevan and Louis Clark, with the consent of Lynne, toured and recorded as ELO Part II from 1988 until Bevan's retirement in 1999. In 2000, Lynne and Tandy reformed Electric Light Orchestra and released a new record, Zoom. Zoom proved to be a commercial failure, and the duo split once more in 2001. Read more on Last.fm. User-contributed text is available under the Creative Commons By-SA License; additional terms may apply.

Mr. Blue Sky Don't Bring Me Down Evil Woman Livin' Thing Turn To Stone Telephone Line Sweet Talkin' Woman Hold on Tight Strange Magic Last Train to London Showdown Can't Get It Out of My Head Shine a Little Love Confusion Twilight Do Ya Ticket to the Moon Rockaria! All Over the World Roll Over Beethoven The Diary of Horace Wimp Wild West Hero Four Little Diamonds 10538 Overture Here Is the News It's Over Ma-Ma-Ma Belle Calling America Across the Border Rock 'n' Roll Is King Rock and Roll Is King The Way Life's Meant to Be Starlight So Serious Jungle Fire on High Night in the City Sweet Is the Night Secret Messages Yours Truly, 2095 Believe Me Now Xanadu When I Was A Boy Big Wheels Rain Is Falling Tightrope I'm Alive Steppin' Out Standin' in the Rain Prologue