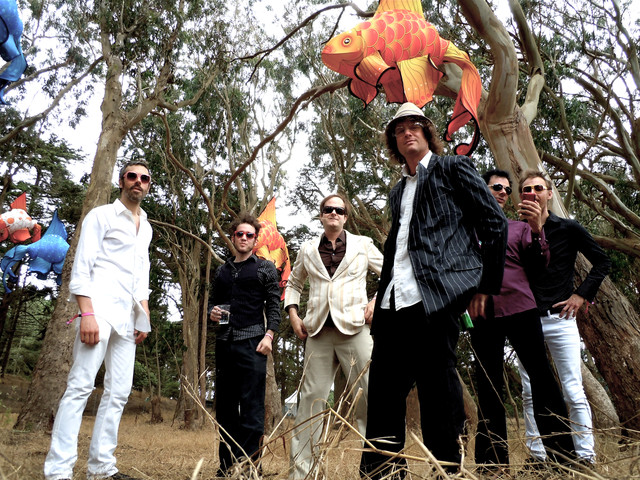 There are two artists that have used the name Electric Six 1. An alternative rock band from the United States 2. A musical group from South Africa 1. Electric Six is a six-piece Detroit-based rock band consisting of Dick Valentine (vocals), Tait Nucleus? (synthesizers), Johhny Na$hinal (guitar), Da Ve (guitar), Percussion World (drums), and Smorgasboard (bass) who play a mix of rock, funk and disco. The band's first notorious formation comprised Valentine, Rock and Roll Indian (guitar), Surge Joebot (guitar), Disco (bass, former member of Detroit Cobras), and M (drums). Dick Valentine (real name Tyler Spencer) has always been the primary songwriter (both music and lyrics) of Electric Six, currently and under their former incarnation, when they were known as the Wildbunch. During the band's temporary split at the end of the 1990s, Spencer formed his own band called The Dirty Shame and released one CD entitled Smog Cutter Love Story which featured, among other tracks, a first version of Fire track Vengeance and Fashion. The band reformed by 2001 to record and release the first release of 'Danger! High Voltage' and record the track 'Dealin' With Death N' Stealin' In The Name Of The Lord' with Troy Gregory for his Sybil album. Electric Six fuses rock and punk with the laid-back funky rhythms and falsetto vocals of disco, and a distinctly comic touch. However, they tend to reject such genre classifications as disco-metal and disco punk. They formed the band in 1996 and were initially known as The Wildbunch, eventually dropping that name due to pressure from the Bristol trip-hop collection of the same name. Throughout the latter half of the '90s, they played about once a month at the Magic Bag in Ferndale, Magic Stick, and the now-defunct Gold Dollar in Detroit, the center of a scene that produced breakout acts like the White Stripes. Electric Six's 2002 breakout single Danger! High Voltage was an infectious dance-rock number, and Jack White from The White Stripes helped sing back up vocals to this track. White has denied this, though Spencer has confirmed it in several interviews. The single reached number 2 on the UK singles chart, and they enjoy icon status in that nation. Their second single, Gay Bar, released in 2003, became a hit as well in the UK, reaching #5 in the charts and further aided the group's growth. Curiously, in the American Radio Edit of this track, The words Nuclear War are censored with whip-crack sound effects. After fulfilling their recording duties (namely their debut album) three members left in June, leaving Dick Valentine, Tait Nucleus? (synthesizer), and M. The Colonel (Zach Shipps, guitar, ex-member of Brendan Benson and Mood Elevator), John R Dequindre (guitar and whose stage name is a combination of two Detroit streets) and Frank Lloyd Bonaventure (bass) subsequently joined the group, though they had all been credited on the album and most had been associated with the group for some time. At that time, they were touring in the UK, and they managed to seamlessly replace the members without interrupting the gigs. In time, Johnny Na$hinal joined the group on guitar, Dequindre switched to bass, and Bonaventure switched to law school. The band's sophomore album, Señor Smoke, was released in the UK on February 14, 2005. Percussion World replaced M on drums around the same time. The first single from the album put the band at the center of controversy, especially with Queen fans following a cover of the Queen hit song Radio Ga Ga. The controversial music video shows lead singer Dick Valentine as the ghost of Queen's flamboyant lead singer Freddie Mercury and a backing band of poodles. Queen drummer Roger Taylor, who wrote the song, said that he was unimpressed with the video; however, Queen guitarist Brian May reportedly liked it. Electric Six claims they were contractually obligated to commit the song to the album. Issues with Warner Brothers caused a switch to Metropolis Records, who released Señor Smoke in the US. Switzerland was released in September 2006. A plethora of videos have also been released, and a fan contribution contest led to the video for the single I Buy the Drugs. I Shall Exterminate Everything Around Me That Restricts Me From Being the Master was released in October 2007. Their next album, titled Flashy, was released in October 2008. In October 2009, their sixth album, KILL, was released. The 7th album, Zodiac was released on September 28, 2010, with one tour-exclusive single (Jam it in the Hole) and the 8th, Heartbeats and Brainwaves, on October 11th 2011. A double live album is set for release in 2012. 2. Electric Six was a Soweto-based South African combo active in the 1960s and 1970s Read more on Last.fm. User-contributed text is available under the Creative Commons By-SA License; additional terms may apply.