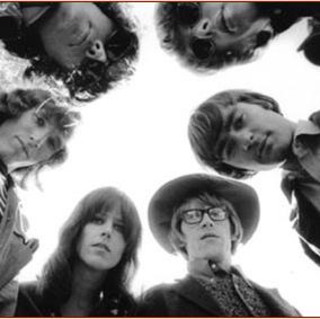 Jefferson Airplane, a rock band based in San Francisco, California, was one of the pioneering bands of psychedelic rock. Formed in 1965, the group defined the San Francisco Sound and was the first from the Bay Area to achieve international commercial success. They were headliners at the three most famous American rock festivals of the 1960s—Monterey (1967), Woodstock (1969) and Altamont (1969)—and the first Isle of Wight Festival (1968) in England. Their 1967 break-out album Surrealistic Pillow ranks on the short list of the most significant recordings of the Summer of Love. Two songs from that album, Somebody to Love and White Rabbit, are among Rolling Stone's 500 Greatest Songs of All Time. The classic lineup of Jefferson Airplane, from October 1966 to February 1970, was Marty Balin (vocals), Paul Kantner (guitar, vocals), Grace Slick (vocals), Jorma Kaukonen (lead guitar, vocals), Jack Casady (bass), and Spencer Dryden (drums). Marty Balin left the band in 1971. After 1972, Jefferson Airplane effectively split into two groups. Kaukonen and Casady moved on full time to their own band, Hot Tuna. Slick, Kantner, and the remaining members of Jefferson Airplane recruited new members and regrouped as Jefferson Starship in 1974, with Marty Balin eventually joining them. Jefferson Airplane was inducted into the Rock and Roll Hall of Fame in 1996 and was presented with the Grammy Lifetime Achievement Award in 2016. Spencer Dryden died on January 11, 2005. Both Signe Anderson and Paul Kantner died on January 28, 2016. Marty Balin died on September 27, 2018 Read more on Last.fm. User-contributed text is available under the Creative Commons By-SA License; additional terms may apply.

White Rabbit Somebody to Love Embryonic Journey Today Plastic Fantastic Lover Volunteers She Has Funny Cars Comin' Back to Me My Best Friend It's No Secret How Do You Feel 3/5 Of A Mile In 10 Seconds Crown Of Creation Blues From An Airplane Lather Greasy Heart Come Up The Years The Last Wall Of The Castle We Can Be Together Wooden Ships Triad Tobacco Road Watch Her Ride High Flyin' Bird The Ballad of You and Me and Pooneil When The Earth Moves Again Martha Good Shepherd Aerie (Gang Of Eagles) Young Girl Sunday Blues In The Morning Let Me In Come Back Baby Eskimo Blue Day High Flying Bird Don't Slip Away Two Heads Bringing Me Down In Time Rejoyce Pretty As You Feel Wild Tyme Let's Get Together Volunteers - Remastered If You Feel Star Track Share A Little Joke Chauffeur Blues Spare Chaynge A Small Package of Value Will Come To You, Shortly