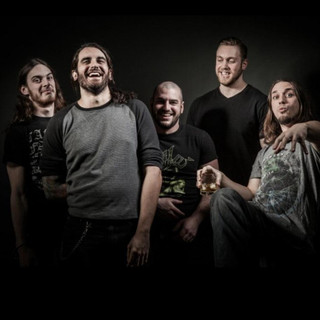 Job for a Cowboy

Job for a Cowboy is an American death metal/deathcore band from Glendale, Arizona. Formed in 2003, the band's debut album Genesis was released in 2007, peaking at No. 54 on the US Billboard 200 and selling 13,000 copies in its first week of release. The second album, 2009's Ruination, sold 10,600 copies in the United States in its first week to debut at position No. 42 on the Billboard 200 chart. The band comprises vocalist Jonny Davy, guitarists Tony Sannicandro and Al Glassman, bassist Nick Schendzielos, and drummer Jon The Charn Rice, with Davy being the only remaining founding member. The band has played in international music festivals, including Download Festival, Mayhem Festival and Wacken Open Air. Job for a Cowboy started as a deathcore group, and evolved into a predominantly death metal sound with their full-length debut Genesis. They have been described by The New York Times as an Arizona band with a guttural, brute-force sound descended (indirectly) from hardcore punk and straightforwardly brutal act by Rolling Stone magazine. At the beginning of 2011, the band started work on an EP which was recorded in February at the Audiohammer Studios in Sanford, Florida with producer Jason Suecof. Just before the recording process began, bassist Brent Riggs and guitarist Bobby Thompson departed from the band and were replaced by Nick Schendzielos of Cephalic Carnage and Tony Sannicandro, respectively. On April 13, 2011, a video appeared on the internet of drummer Jon Rice performing a new song in the studio. Job for a Cowboy issued their new EP on June 7, 2011, entitled Gloom, which was only made available for purchase through mail order and digital download. On February 21, 2012, Job for a Cowboy released their first single from their new album Demonocracy, titled “Nourishment Through Bloodshed”. It was released via Metal Blade Records' YouTube channel. On March 20, Job for a Cowboy premiered the song Black Discharge” and on April 2, the song Imperium Wolves”. Demonocracy is set to be released on April 10, 2012. Current members Jonny Davy – lead vocals (2003–present) Jon The Charn Rice – drums (2007–present) Al Glassman – guitar (2008–present) Tony Sannicandro – guitar, backing vocals (2011–present) Nick Schendzielos – bass guitar (2011–present) Read more on Last.fm. User-contributed text is available under the Creative Commons By-SA License; additional terms may apply.