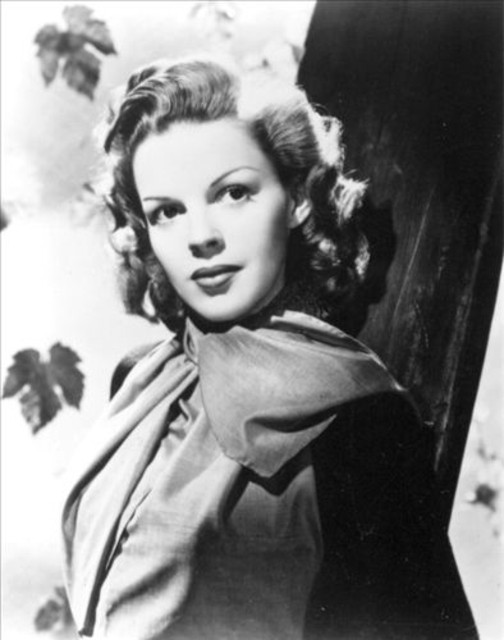 Judy Garland (June 10, 1922 – June 22, 1969) was an American actress and singer from Grand Rapids, Minnesota, USA. Through a career that spanned 45 of her 47 years, Garland attained international stardom as an actress in musical and dramatic roles, as a recording artist, and on the concert stage. Respected for her versatility, she received a Juvenile Academy Award, won a Golden Globe Award, received the Cecil B. DeMille Award for her work in films, as well as Grammy Awards and a Special Tony Award. She had a contralto singing range. After appearing in Vaudeville theater with her sisters, Judy was signed to Metro-Goldwyn-Mayer as a teenager. There she made more than two dozen films, including nine with Mickey Rooney, and the film with which she would be most identified, The Wizard of Oz (1939). After 15 years, Judy was released from the studio but gained renewed success through record-breaking concert appearances, including a critically acclaimed Carnegie Hall concert, a well-regarded but short-lived television series, and a return to film acting beginning with A Star Is Born (1954). Despite her professional triumphs, Judy battled personal problems throughout her life. Insecure about her appearance, her feelings were compounded by film executives who told her she was unattractive and overweight. Plied with drugs to control her weight and increase her productivity, Garland endured a decades-long struggle with addiction. Garland was plagued by financial instability, often owing hundreds of thousands of dollars in back taxes, and her first four of five marriages ended in divorce. She attempted suicide on a number of occasions. Garland died of an accidental drug overdose at the age of 47, leaving children Liza Minnelli, Lorna Luft, and Joey Luft. Legacy Judy Garland's legacy as a performer and a personality has endured long after her death. The American Film Institute named Garland eighth among the Greatest Female Stars of All Time. She has been the subject of over two dozen biographies since her death, including the well-received Me and My Shadows: A Family Memoir by her daughter, Lorna Luft. Luft's memoir was later adapted into the multiple award-winning television mini-series, Life with Judy Garland: Me and My Shadows, which won Emmy Awards for two actresses portraying Garland (Tammy Blanchard and Judy Davis). Garland was posthumously awarded the Grammy Lifetime Achievement Award in 1997. Several of her recordings have been inducted into the Grammy Hall of Fame. These include Over the Rainbow, which was ranked as the number one movie song of all time in the American Film Institute's 100 Years...100 Songs list. Four more Garland songs are featured on the list: Have Yourself a Merry Little Christmas (#76), Get Happy (#61), The Trolley Song (#26), and The Man That Got Away (#11). Judy Garland has twice been honored on U.S. postage stamps, in 1989 (as Dorothy) and again in 2006 (as Vicki Lester from A Star Is Born). Read more on Last.fm. User-contributed text is available under the Creative Commons By-SA License; additional terms may apply.