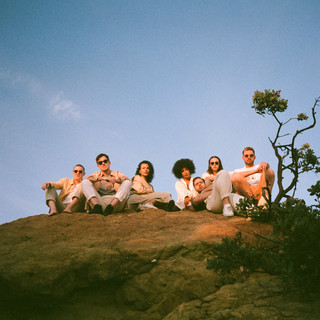 There are several artists using the moniker 'Jungle'. 1. Jungle is an English modern soul musical collective founded by childhood friends, Tom McFarland and Josh Lloyd-Watson. Jungle was formed at the beginning of 2013, choosing to put an aesthetic emphasis on the music’s surrounding artwork and videos, and not on the pairs' own identity, (McFarland and Lloyd-Watson came to be known as J and T). Throughout the following year Jungle developed its nature as a collective by working with different artists across diverse disciplines. To perform the music live, Jungle expanded to a seven-piece band, fronted by J and T. Their debut album Jungle was released through XL Recordings on 14 July 2014. The album was met with great critical acclaim and was later shortlisted for the 2014 Mercury Prize. Their 2nd album, For Ever, was released on 14 September 2018. 2. Based in Ann Arbor, Michigan – “Jungle” is a world/rock/fusion power trio featuring Steve Muruga Booker on drums, Dave Sharp on bass, and Steven Springer on guitar. “Jungle” was formed in 2010 when Muruga, Dave, and Steven collaborated on a project at Muruga’s Sage Ct. recording studio. While in studio they recorded their first album “Jungle.” Drawing from many influences like Coltrane, Hendrix, Funkadelic etc. they recorded the album live. Steven Muruga Booker, born in Detroit, MI, is a world renowned drummer and percussionist with musical roots going back to the late 1950's when he played in the Detroit rock n roll band “The Low Rocks.” Muruga was inspired by the blues, rock, and soul of the Detroit scene. He played with the legendary bluesman John Lee Hooker. They were booked as Hooker and Booker. Muruga is also known for his drum solos at venues like the East Town and Chessmate in Detroit. Playing with many artists throughout his career some highlights include playing Woodstock in 1969 with Tim Hardin, performing at Carnegie Hall with Dave Brubeck, playing on Weather Reports “Sweet Nighter” in 1973, and collaborating with George Clinton and the P-Funk All Stars from the late 70's to the present. In 1990 Muruga released the billboard charting album Blues from the Rainforest with Merl Saunders and Jerry Garcia. In 1991 he was a recipient of th Hiroshima Voices for Peace award. He is featured on the Chesky Records album Circle of Drums with Babatunde Olatunji and Sikiru Adepoju. Most recently Muruga has released several albums on the Italian label Qbico Records and his 2010 release Kiss of Peace is nominated for 2010 Detroit Music Award for outstanding world music recording. Steven Springer grew up in Port of Spain, Trinidad and is an accomplished, soulful songwriter and innovative finger style guitarist, with his roots in reggae, soca and calypso. His unique musical style is a melting pot of jazz, reggae, Latin, blues, rock and R&B, which combine to form a refreshing exceptional sound. When watching Springer perform, audiences from around the world have been witnessed an artist delivering his music with energy, conviction and raw emotion. Born in Trinidad, in the West Indies, Steven Springer was inspired by the melodic lilting sound of soca and calypso. He started playing guitar at a young age. Steven was intrigued by the fusion of many cultures and the beautiful natural features of Trinidad. In his early twenties, Steven moved to Phoenix, Arizona and formed a band called Sanctuary. Touring worldwide, Springer was a featured artist at the 1988 World’s Fair in Brisbane, Queensland, Australia, performing with the Trinidad Calypso Band. Upon returning to the United States, Springer joined Hugh Borde’s world famous Trinidad Tripoli Steel Band, performing and recording with them for over ten years. Currently, Steven also leads the band Tropicooljazz. Among other numerous awards and honors, Steven was chosen “Best Guitar Player,” every year from 1990 to 1993, at the annual Detroit Music Awards. Dave Sharp, a native Detroiter, became devoted to jazz at the University of Michigan and gained his chops under the tutelage of renowned bassist Herbie Lewis (McCoy Tyner, Cannonball Adderly and Les McCann) in San Francisco, and virtuoso bassist, composer and bandleader Marion Hayden (Straight Ahead) in Detroit. As bassist and composer for the modern jazz ensemble “Spheres of In uence,” and touring bassist for the seminal rock band “The Melvins” (Atlantic Records), Sharp has already made a mark on the national scene. He lives in Ann Arbor, Michigan where he composes, records, teaches and performs with Jungle has his own band Dave Sharp's Secret Seven. 3.Nothing is known about this excellent late sixties album's makers. A reissue is now available, so you can hear how good it is for yourself! Early Morning Rising, Slave Ship, House Of Rooms and Gray Picnic are all loaded with nice guitar and organ, even frantic (if somewhat inept) drumming on occasion. The tracks have an atmospheric, open quality and the recording is superb. This is a lost gem. The reissue has a deluxe embossed cover. It was originally issued in a plain sleeve. (Clark Faville for Fuzz, Acid and Flowers book) Read more on Last.fm. User-contributed text is available under the Creative Commons By-SA License; additional terms may apply.