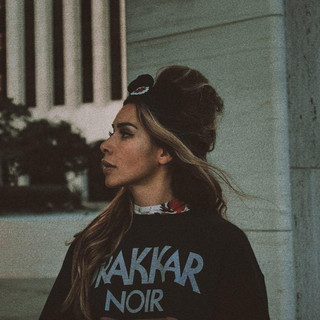 Melisa Young (born July 3, 1980) better known by her stage name Kid Sister, is a rap artist based in Chicago, Illinois, well known for her single Pro Nails, featuring Kanye West. Kid Sister started to rap in October 2005, becoming a MC at monthly dance parties hosted by DJ duo Flosstradamus who were featured in MTV's My Block that same year. She made URB's The Next 1000 cover in April 2007, and was signed to Kanye West's DJ A-Trak's label, Fool's Gold, who released her first single Pro Nails, which features Kanye West. Kid Sister later signed with Downtown Records, who re-released Pro Nails to critical acclaim. Kid Sister also appears on Tittsworth's WTF, from his debut album 12 Steps, with Pase Rock. She had also finished a mixtape with A-Trak. As of Fall 2009, Kid Sister has finished recording her debut studio album . The title has been changed from Dream Date to Ultraviolet. The United States album release date is November 17, 2009. The tracks have been produced by dubstep artist Rusko, The Count and Sinden, XXXChange, and Disturbia producer, Brian Kennedy and the album includes a feature with British musician Estelle. The two have collabrated on a remake of Queen Latifah's acclaimed track, Step (formerly Ladies First) off her debut album. It is titled First Ladies. And also her single Control is featured in the new video game DJ Hero with Rihanna's Disturbia. The first single off is titled Right Hand Hi, which is produced by Steve Angello and Sebastian Ingrosso of house DJ group, Swedish House Mafia. I think a lot of people are going to be surprised with the fact that there’s a bunch of raw hip-hop records on there, according to A-Trak. It's not all up tempo clubby stuff. I think a lot of people are going to be impressed with her growth also because when she made a lot of the records that people have heard by now, she was just starting to rap. Kid Sister's ethnic background includes African American, Native American, and Caucasian. In numerous interviews and magazine articles, she has revealed that she has struggled financially for years before becoming Kanye West's protege. Recently she has admitted to being 215 pounds at one point in her life. She continues in this interview that she has been thick her whole life but explains that this has had no bearing on her self-esteem because at her core she is not a passive person. Kid Sister has a degree in film from Columbia College Chicago and worked on two independent feature films during her studies: 9/11 drama The Guys (2002) starring Sigourney Weaver and Anthony LaPaglia; and Best Thief In the World (2003) starring Mary Louise Parker and Audra McDonald. Kid Sister once worked for retail chain Bath & Body Works, which she sometimes mentions in interviews and in her creative work. Read more on Last.fm. User-contributed text is available under the Creative Commons By-SA License; additional terms may apply.