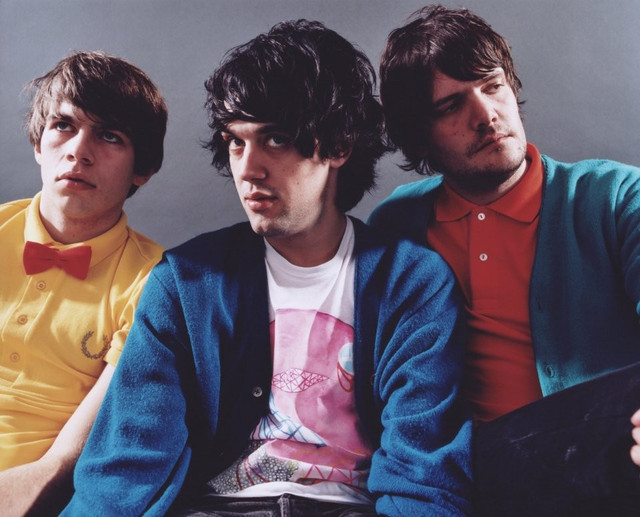 Klaxons were an indie rock band, based in London. The band consisted of Jamie Reynolds (bass, vocals), James Righton (keyboards, vocals), Simon Taylor-Davies (guitar) and Steffan Halperin (drums). They have been on indefinite hiatus since 2014. Reynolds, Righton and Taylor-Davies formed the band in New Cross, London, United Kingdom, in 2005 Their debut single, Gravity's Rainbow was released on 29 March 2006 as a 500 copies limited 7-inch vinyl, decorated by the band themselves. Their first first EP, Xan Valleys, was released on 16 October 2006, and contained their first two singles alongside some remixes. Following the release of numerous 7-inch singles on different independent record labels, as well as the success of previous singles Magick and Golden Skans, the band released their debut album, Myths of the Near Future on 29 January 2007. The album won the 2007 Nationwide Mercury Prize. After headlining their first tour (the 2007 NME Indie Rave Tour), as well as playing numerous festivals and headlining tours worldwide, the band started working on their follow-up album in October 2007. HMV describes Klaxons as acid-rave sci-fi punk-funk, a phrase lifted directly from Tim Chester's Radar feature in NME, while their MySpace page touts 'Psychedelic / Progressive / Pop'. However, they are one of the isolated acts being referred to as 'Nu Rave', a genre term coined by Angular Records founder Joe Daniel, who released the trio's first single. Though the band's sound is decidedly art rock, they draw upon some less common influences - notably the rave culture of the 1990s, which they appropriate and redefine in a post-modern fashion. Their influences are perhaps most represented in their covers of rave hits The Bouncer by Kicks Like a Mule and Not Over Yet by Grace. Both tracks have since been released by the band, the first as part of a double a-side with Gravity's Rainbow in March 2006 and the latter as a single on June 25, 2007 titled It's Not Over Yet. While the band are consistently hailed as the defining act of the sparsely-populated Nu Rave movement, Klaxons have worked to avoid being typecast as champions of the disputed genre that may or may not exist. Indeed, it is questionable whether or not the style referred to as New Rave is even appreciably different from the older genre dance-punk. Even so, Klaxons member Jamie Reynolds expressed no regrets at the dubious honor, saying that ...it's great that it started as an in-joke and became a minor youth subculture Klaxons recorded a song All Rights Reversed with Chemical Brothers on their album We Are The Night(2007). Read more on Last.fm. User-contributed text is available under the Creative Commons By-SA License; additional terms may apply.

Late of the Pier

Golden Skans Atlantis to Interzone It's Not Over Yet Gravity's Rainbow Two Receivers Magick Totem on the Timeline Isle of Her Forgotten Works As Above, So Below Four Horsemen of 2012 Echoes The Same Space Twin Flames Surfing the Void Valley of the Calm Trees Venusia Flashover Extra Astronomical Future Memories Cypherspeed As Above So Below Gravity's Rainbow (Soulwax Remix) The Bouncer Gravity's Rainbow (Van She Remix) There Is No Other Time Atlantis To Interzone (Crystal Castles Remix) As Above, So Below (Justice Remix) Show Me a Miracle Hall Of Records Gravitys Rainbow Golden Skans To Interzone (So Me Remix) Instrumental No Diggity Invisible Forces Children of the Sun Out of the Dark New Reality Atom to Atom 4 Horsemen Of 2012 (Untitled) Rhythm of Life Liquid Light Love Frequency The Dreamers Golden Skans (SebastiAn Remix) Gravitys Rainbow (Soulwax remix) Not Over Yet The Pale Blue Dot Magick (Simian Mobile Disco Remix)