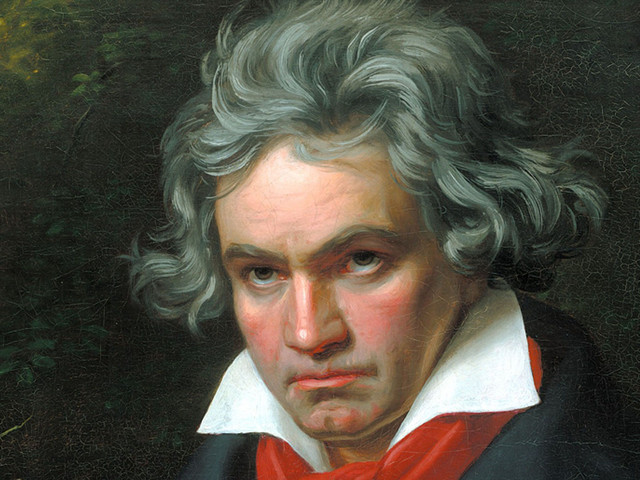 Ludwig van Beethoven (16 December 1770 – 26 March 1827) was a German pianist and composer of the transitional period between the late Classical and early Romantic eras. He is often regarded one of the most brilliant, prolific and influential composers of all time. Beethoven is widely regarded as a master of musical construction, sometimes sketching the architecture of a movement before he had decided upon the subject matter. He was one of the first composers to systematically and consistently use interlocking thematic devices, or 'germ-motives', to achieve unity between movements in long compositions. (Some insight into the meaning of the germ-motive device is given at the end of this bio.) Equally remarkable was his use of source-motives', which recurred in many different compositions and lent some unity to his life’s work. He made innovations in almost every form of music he touched. For example, he diversified even the well-crystallised form the rondo, making it more elastic and spacious, which brought it closer to sonata form. He was mostly inspired by the natural course of nature, and liked to write songs describing nature. Beethoven composed in a great variety of genres, including symphonies, concerti, piano sonatas, other instrumental sonatas (including for violin), string quartets and other chamber music, masses, lieder, and one opera. Beethoven's compositional career is usually divided into Early, Middle, and Late periods: In the Early (Classical) period, he is seen as emulating his great predecessors Haydn and Mozart, while concurrently exploring new directions and gradually expanding the scope and ambition of his work. Some important pieces from the Early period are the first and second symphonies, the first six string quartets, the first three piano concertos, and the first twenty piano sonatas, including the famous Pathétique and Moonlight sonatas. The Middle (Heroic) period began shortly after Beethoven's personal crisis centering around his encroaching deafness. The period is noted for large-scale works expressing heroism and struggle; these include many of the most famous works of classical music. Middle period works include six symphonies (numbers 3 to 8), the fourth and fifth piano concertos, the triple concerto and violin concerto, five string quartets (numbers 7 to 11), the next seven piano sonatas (including the Waldstein and the Appassionata), and Beethoven's only opera, Fidelio. Beethoven's Late (Romantic) period began around 1816. The Late-period works are characterised by intellectual depth, intense and highly personal expression, and formal innovation (for example, the Op. 131 string quartet has seven linked movements, and the Ninth Symphony adds choral forces to the orchestra in the last movement). Works of this period also include the Missa Solemnis, the last five string quartets, and the last five piano sonatas. Deconstructing the sonata form, both in the overall schema (movements, tempos) and in the micro-form, Beethoven began to use germinal ideas propelling the whole melodic, harmonic, and rhythmic progression. In the first quartet of the group (E flat major, Op.127 – February 1825), the Adagio has five variations (in this case, a source-theme becomes the backbone of the tempo). That same year, in July, Quartet in A minor, Op.132, features a first movement with the traditional two themes, but without contrast; they display and disseminate sub-sections and ‘germs’ in a circular frame, interlocking with each other. Beethoven's germ-motive is like a Bach choral, summoning the other voices around itself. The last quartet, Op. 135 in F major, was composed in a downplayed form, going back to a more traditional four-tempo structure. But internally one finds the same frozen micro-structure: the first movement is harmonically ambiguous, whereas the scherzo sounds like Bartók, and in the finale, the canon ‘Es muss sein’ plays a joyful role. A terrible grave comes in afterward, to dissolve into a soft pizzicato: adieu music, adieu life . It was never heard by the now deaf Beethoven, and he died shortly afterward. Read more on Last.fm. User-contributed text is available under the Creative Commons By-SA License; additional terms may apply.