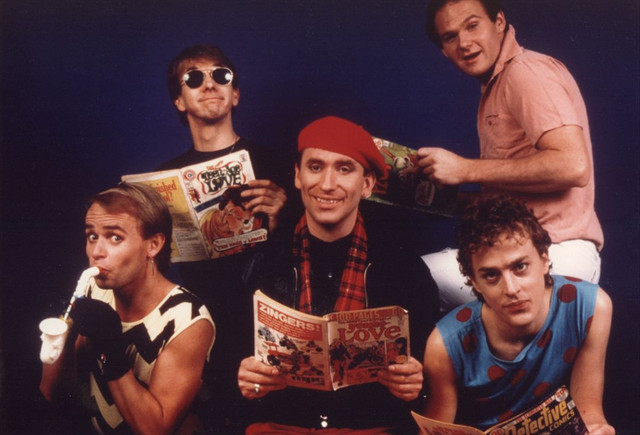 Men at Work are an ARIA Music Award winning and Grammy winning rock band that formed in Melbourne, Australia in 1979. Considered a popular part of the new wave movement in Australia, the band's best known line-up consisted of Colin Hay (vocals, guitar), Ron Strykert (guitar, vocals), John Rees (bass), Greg Ham (saxophone, flute, keyboards), and Jerry Speiser (drums). They are best known their worldwide hit singles Who Can It Be Now?, Down Under, and Overkill. Their initial line-up had many successful tours and released three albums, 'Business as Usual' (1981), 'Cargo' (1983), and 'Two Hearts' (1985), before disbanding in 1985. Men at Work won the 1983 Grammy Award for Best New Artist, beating an impressive set of rivals including Asia, Jennifer Holliday, The Human League, and Stray Cats.. In August 1983, they ware given a Crystal Globe Award for $100 million worth of record business by their U.S label. That same year, in Canada, they were awarded a Juno Award for International LP of the Year. At the ARIA Music Awards of 1994, they were inducted into the related Hall of Fame. In terms of songs, their work has remained considerably popular. In May 2001, Down Under was listed at No. 4 on the APRA Top 30 Australian songs. In October 2010, 'Business as Usual' was listed in the book of 100 Best Australian Albums. According to Australian musicologist Ian McFarlane, the group's phenomenal success inextricably created worldwide interest in Australia and Australian music irrespective of the band's fairy-tale rise to prominence. He's also said that they simply opened the floodgates with little more than a clutch of great songs and were Australia's most famous group. Men at Work have sold over 30 million albums worldwide in total. The band's singer-songwriter frontman, Colin Hay, pursued a solo career after it folded. In 1996, Hay and Ham reformed the band with replacement members. With new wave fans enjoying hearing 80s hits again live, the band had several popular tours. Sadly, Ham was found dead in his home in April 2012, and the future of Men at Work remains unclear. Read more on Last.fm. User-contributed text is available under the Creative Commons By-SA License; additional terms may apply.