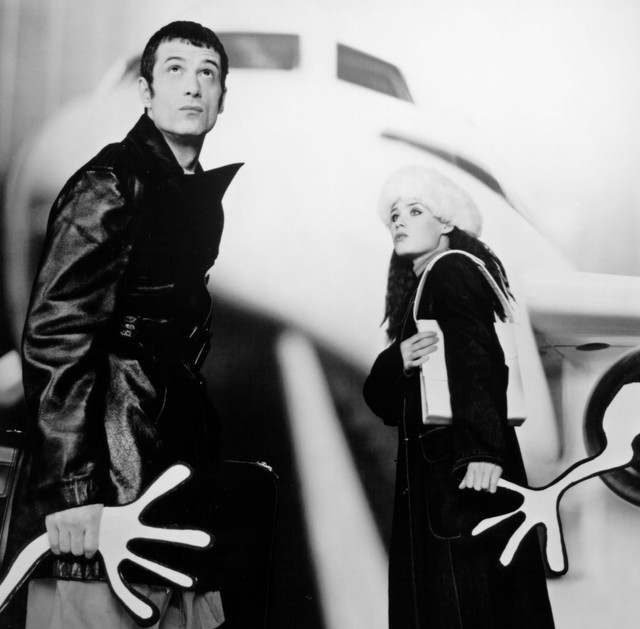 Moloko were a trip-hop / electropop band from Sheffield, UK, founded by Mark Brydon (b. Sunderland, UK) and Róisín Murphy (b. Arklow, Ireland), in 1995. It debuted with the Moloko EP (May 1995, Echo) and later with Do You Like My Tight Sweater? (Sept 1995, Echo). Their latest and final studio album is Statues, released in 2003. They met at a Sheffield party, when Murphy had no prior professional singing experience. Meanwhile, Brydon had a thirteen-year musical résumé, first with Chakk / Hula pioneering EBM (then, aka big beat). Subsequently, within dance music, he formed and produced various pop and house acts, e.g. producing Krush's hit House Arrest (1987, FON) and his 1993 Cloud Nine project. Murphy approached Brydon with the chat-up line Do you like my tight sweater? See how it fits my body!, hence their debut album's title. Respectively, 'Moloko' originates from the Nadsat slang word for milk (from the Russian, молоко), in Anthony Burgess' novel A Clockwork Orange. Recorded while the pair were dating, Do You Like My Tight Sweater? gained notice on underground dance and trip-hop scenes, then more so with I Am Not a Doctor (Jul 1998, Echo). The latter yielded Sing It Back, which broke Moloko into the mainstream. Remixed by house producer Boris Dlugosch, Sing It Back (Boris Musical Mix), was a massive Ibiza hit and entered the top-five of 1999 weekly UK singles charts, helped by a psychedelic video featuring Murphy in a very short metallic flapper dress and cap. Sing It Back was eventually featured on more than 110 music compilations. Dlugosch's remix also appears on faux radio station Rise FM in the action-adventure game GTA: Liberty City Stories (2005, Rockstar Games). In 2000 Moloko started touring as a full band along with percussionist Paul Slowly, keyboardist Eddie Stevens, and guitarist Dave Cook. The band also had chart success with The Time Is Now, the first single from their third album, Things to Make and Do. This album had relied less on the leftfield beats of the previous albums, and featured more organic instrumentation. Murphy and Brydon ended their relationship in 2001. After their breakup they recorded and released their fourth and final studio album, Statues, in 2003. Statues continued a segue into more traditional instrumentation, along with electronica elements from their earlier releases. The album majorly incorporated the theme of the couple's split: all of the songs deal with a troubled and/or ending romance. In 2004 Moloko released a live DVD, 11,000 Clicks, recorded on stage at the Brixton Academy. It contained many of their well known songs including Indigo, Sing It Back, and The Time Is Now. After concluding the tour supporting Statues, Moloko mutually parted ways, with Róisín Murphy launching a solo career. A best of album, Catalogue, was released in 2006. Murphy and Brydon, along with long-time Moloko guitarist Dave Cook, played a select number of acoustic radio performances to promote the album. Since 2006 they have been on an indefinite hiatus. Read more on Last.fm. User-contributed text is available under the Creative Commons By-SA License; additional terms may apply.

The Time Is Now Sing It Back Fun for Me Forever More Pure Pleasure Seeker Familiar Feeling Cannot Contain This Day for Night Statues Indigo The Only Ones Come On I Want You Familiar Feelings The Flipside Absent Minded Friends 100% Being Is Bewildering Mother Remain the Same It's Your Problem Just You and Me Dancing Somebody Somewhere Bankrupt Emotionally Sing It Back (Boris Musical Mix) On My Horsey Lotus Eaters Knee Deepen Dominoid I Can't Help Myself Where is the What if the What is in Why? Over And Over Over & Over Blink Caught in a Whisper Be Like You Downsized Ho Humm Sing It Back - Boris Dlugosch Mix Killa Bunnies Butterfly 747 Blow X Blow Blow By Blow Boo Pretty Bridges Tatty Narja Over My Head Stylophone Pet Sorry If You Have a Cross to Bear You May as Well Use It as a Crutch