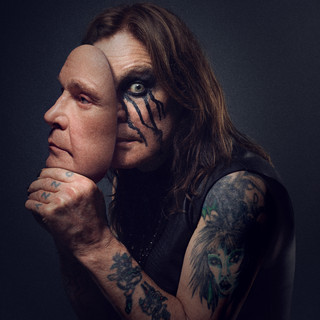 John Michael Ozzy Osbourne (born 3 December 1948) is an English singer, songwriter and actor. He rose to prominence in the early 1970s as the lead vocalist of the heavy metal band Black Sabbath. He was fired from Black Sabbath in 1979 and went on to have a successful solo career, releasing 11 studio albums, the first seven of which were all awarded multi-platinum certifications in the US. Osbourne has since reunited with Black Sabbath on several occasions, recording the album 13 in 2013. His longevity and success have earned him the informal title of Godfather of Heavy Metal. Osbourne's total album sales from his years in Black Sabbath, combined with his solo work, is over 100 million. As a member of Black Sabbath, he was inducted into the Rock and Roll Hall of Fame, and he was inducted into the UK Music Hall of Fame as a solo artist and as a member of the band. Possessing a distinctive singing voice and as a native of Birmingham, Osbourne is known for his strong Brummie accent – he has a star on the Birmingham Walk of Stars in his hometown as well as the Hollywood Walk of Fame. At the 2014 MTV Europe Music Awards, he received the Global Icon Award. In the early 2000s, Osbourne became a reality television star, appearing as himself in the MTV reality show The Osbournes, alongside wife and manager Sharon and two of their three children, Kelly and Jack. Osbourne appeared with son Jack in the 2016 worldwide travelogue docuseries Ozzy & Jack's World Detour. Osbourne was born in the Aston area of Birmingham, England. His mother, Lillian, was a non-observant Catholic who worked days at a factory.[6] His father, John Thomas Jack Osbourne (1915–1977), worked night shifts as a toolmaker at the General Electric Company. Osbourne has three older sisters named Jean, Iris, and Gillian, and two younger brothers named Paul and Tony. The family lived in a small two-bedroom home at 14 Lodge Road in Aston. Osbourne has had the nickname Ozzy since primary school. Osbourne dealt with dyslexia at school. Drawn to the stage, he took part in school plays such as Gilbert and Sullivan's The Mikado and HMS Pinafore. As a Birmingham native, he has a strong Brummie accent. Upon hearing their first hit single at age 14, he became a great fan of The Beatles. He credits the band's 1963 song She Loves You for inspiring him to become a musician. He said in the 2011 documentary God Bless Ozzy Osbourne that as soon as [he] heard 'She Loves You' on the radio, [he] knew [he] wanted to be a rock star for the rest of [his] life. Osbourne left school at 15 and was employed as a construction site labourer, trainee plumber, apprentice toolmaker, car factory horn-tuner, and abattoir worker. He attempted to commit burglary, stealing a television (which fell on him during his getaway and had to be abandoned), a handful of baby clothes (originally thought to be adult clothes as it was too dark to see when he committed the burglary, and which were stolen to sell to people at a pub), and some T-shirts.He spent six weeks in Winson Green Prison when he was unable to pay a fine after being found guilty of robbing a clothes shop; to teach his son a lesson, his father refused to pay the fine. Read more on Last.fm. User-contributed text is available under the Creative Commons By-SA License; additional terms may apply.

Crazy Train Mr. Crowley Bark at the Moon Mama, I'm Coming Home Dreamer No More Tears I Just Want You I Don't Wanna Stop Goodbye to Romance Shot in the Dark Over the Mountain Suicide Solution Perry Mason Hellraiser Let Me Hear You Scream Flying High Again I Don't Know Road To Nowhere Diary of a Madman See You on the Other Side Crazy Train - Remastered GETS ME THROUGH Iron Man Time After Time Dee Desire Miracle Man Not Going Away No Bone Movies Paranoid I Don't Want To Change The World You're No Different Crazy Babies Let It Die Revelation (Mother Earth) Black Rain Steal Away (The Night) Rock 'n' Roll Rebel Believer Thunder Underground No Easy Way Out Mr. Tinkertrain Life Won't Wait So Tired Lay Your World on Me Soul Sucker You Can't Kill Rock And Roll Facing Hell Here For You The Almighty Dollar