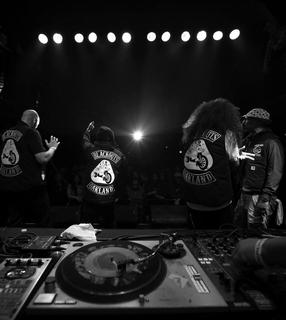 Souls of Mischief is a hip hop group from Oakland, CA, and part of the hip hop collective Hieroglyphics. Its members include A-Plus, Tajai, Phesto, and Opio. Souls of Mischief debuted in 1993 with their album 93 'til Infinity, released on Jive Records. They later released No Man's Land (1995), Focus (1999), and Trilogy: Conflict, Climax, Resolution (2000). On December 1st, 2009, Souls of Mischief released Montezuma's Revenge, a collaboration with Prince Paul, also featuring other members of Hieroglyphics. History: Oakland native Tajai began rhyming with future bandmate A-Plus at age 8, while both were in elementary school.[1] Tajai and Phesto met later in junior high school.[2] Tajai later introduced A-Plus and Phesto to the remaining Souls of Mischief member, Opio, and the group informally formed in high school before making their major-label debut on Jive Records with their well-received album 93 'til Infinity, in 1993.[2] 93 ’til Infinity is the group's highest charting album to date (#17 Top R&B/Hip Hop Albums; #85 Billboard 200), and in January, 1998, was named one of the Top 100 Rap albums by The Source magazine. The group stayed with Jive for one more album, 1995's No Man's Land, before being released from the label during that same year. In 1995, following the release of the group from its major-label contract with Jive, the group officially formed the alternative hip-hop collective Hieroglyphics, with emcees Del tha Funkee Homosapien, Casual, Pep Love, Jaybiz, and producer Domino.[2] The group participated as full members in both Hieroglyphics' studio albums: 1998's 3rd Eye Vision, and 2003's Full Circle. The group has released two albums on the Hiero's self-owned independent label, Hieroglyphics Imperium Recordings, 1999's Focus, and 2000's Trilogy: Conflict, Climax, Resolution. On October 30, 2006, Hierocast (Hieroglyphics' official podcast), Del tha Funkee Homosapien reported that the Souls of Mischief were currently working on their next studio album with Prince Paul (De La Soul, Gravediggaz, Handsome Boy Modeling School). This album, Montezuma's Revenge, was released in 2009. Read more on Last.fm. User-contributed text is available under the Creative Commons By-SA License; additional terms may apply.

93 'til Infinity That's When Ya Lost Live and Let Live Let 'Em Know Anything Can Happen Make Your Mind Up A Name I Call Myself Disseshowedo Never No More Batting Practice Limitations What a Way to Go Out Tell Me Who Profits Outro Step to My Girl Tour Stories '93 'Til Infinity Ya Don't Stop Postal 93 Til Infinity Proper Aim 93 'Til Infinity - LP Instrumental Spark No Man's Land Rock It Like That Cab Fare Freshdopedope Medication Secret Service You Got It Hiero HQ So You Wanna Be A... Fa Sho Fo Real Come Anew Do You Want It? Intro '94 Via Satellite There Is Only Now - Instrumental Hotel, Motel Times Ain't Fair Dirty D's Theme (Hoe Or Die) Poets Won! Yeah it Was You Trilogy Step Off Fourmation Home Game Shooting Stars For Real Y'all