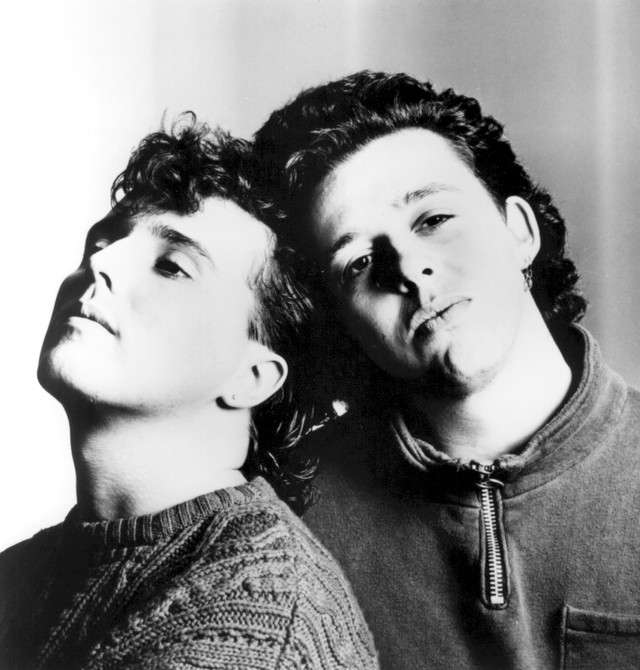 Tears for Fears, named after a phrase found in Arthur Janov's book Prisoners of Pain, is a British pop/rock outfit formed in 1981 in Bath, England. Founder members Roland Orzabal and Curt Smith had been friends since their early teens and had already been in the shortlived ska band Graduate. Initially associated with the new wave and synthesiser bands of the early 1980s, Tears For Fears' earlier work, as evidenced on their 1983 debut album The Hurting , was explicitly based around the emotional angst of adolescence. The album reached number one in the UK and contained three UK Top 5 singles. Orzabal and Smith made their major international breakthrough with their second album, Songs from the Big Chair (1985), which sold over 10 million copies worldwide and topped the US album charts for five weeks (it peaked at #2 in the UK and spent six months in the Top 10). Five singles from the album reached the UK Top 30, with Shout reaching #4, and their highest charting hit, Everybody Wants to Rule the World, reaching #2. Both singles reached #1 on the US Billboard Hot 100. After a lengthy break from the music industry, the band's third album was the jazz/blues/Beatles influenced The Seeds of Love, released in 1989. The album featured American soul singer/pianist Oleta Adams whom the duo had discovered playing in a Kansas hotel bar during their 1985 tour. The Seeds of Love became their second #1 album in the UK, after the title track Sowing the Seeds of Love, had given them another UK and US Top 5 hit. However, after another world tour, Orzabal and Smith had an extremely acrimonious falling out and went their separate ways. The split was ultimately blamed on Orzabal's intricate but frustrating approach to production and Smith's desire to lead the jetset lifestyle now afforded to him which lessened his involvement in the studio. The two spent the next decade working separately. Orzabal retained the band name and, now working with longterm associate Alan Griffiths, released the 1992 single Laid So Low (Tears Roll Down), which appeared on that year's compilation Tears Roll Down (Greatest Hits 82-92). In 1993, Orzabal released the full-length album Elemental, also under the Tears for Fears name, though still effectively him and Griffiths. Another album, Raoul and the Kings of Spain, was released in 1995. Orzabal released Tomcats Screaming Outside, his first album under his own name, in 2001. Smith also released a solo album, Soul on Board, in 1993, but this sank without trace in the UK and was not released elsewhere. Finding his own writing partner (Charlton Pettus) in the US where he now lived, he released another album in 1997 under the name Mayfield. In 2000, routine paperwork obligations led to Roland Orzabal and Curt Smith's first conversation in nearly a decade. The two patched up their differences and decided to work together again. Fourteen new songs were written and recorded, and the ensuing album, Everybody Loves a Happy Ending, was eventually released in September 2004. By this time, the band's earlier song Head Over Heels, as well as a cover of Mad World performed by Gary Jules and Michael Andrews, appeared in the 2001 film Donnie Darko, providing the band with some rejuvenation for newer generations. The Jules/Andrews version of Mad World was released as a single in 2003 and became a UK number 1. Since the reunion, Tears For Fears has been touring internationally on a semi-regular basis. In April 2010, they joined the reformed 80s pop group Spandau Ballet on their 7-date tour of Australia and New Zealand, before a 4-date headlining tour of their own in South East Asia (Philippines, Singapore, Hong Kong and Taiwan) and a 17-date tour of the USA.[14] The band, then, continued to perform small scale tours on an annual basis. In 2011 and 2012, they played dates in the US, Japan, South Korea, Manila and South America. In May 2013, Smith confirmed that he was writing and recording new Tears for Fears material with Orzabal and Charlton Pettus. 3-4 songs were worked on in the UK at Orzabal’s home studio, Neptune’s Kitchen, in April of 2013. Further work on a new Tears For Fears album commenced in L.A. in July of 2013. According to Orzabal, they have been producing of more dark, dramatic pieces of music, which gave the pending album the tongue-in-cheek working title of Tears for Fears: The Musical. “There’s one track that’s a combination of Portishead and Queen. It’s just crazy,” Orzabal stated. To commemorate the 30th anniversary of the band’s debut album The Hurting, Universal Music are re-releasing it in two Deluxe Editions (one a 2-disc set and the other a 4-disc set with a DVD of the 1983 In My Mind’s Eye concert) in October 2013. In August 2013, Tears For Fears released their first newly recorded material in nearly decade, with a cover of Arcade Fire’s “Ready to Start” made available on SoundCloud. Read more on Last.fm. User-contributed text is available under the Creative Commons By-SA License; additional terms may apply.

Everybody Wants to Rule the World Shout Mad World Head Over Heels Sowing The Seeds Of Love Woman In Chains Pale Shelter Change Mothers Talk Advice For The Young At Heart I Believe Break It Down Again The Working Hour Head Over Heels - Dave Bascombe 7 N.Mix Laid So Low (Tears Roll Down) Broken Head Over Heels / Broken The Hurting Listen Suffer The Children Pale Shelter - 2nd Single Version Watch Me Bleed Memories Fade Badman's Song Ideas As Opiates Start Of The Breakdown Famous Last Words Year Of The Knife The Prisoner Swords And Knives Goodnight Song Raoul And The Kings Of Spain Standing On The Corner Of The Third World Closest Thing to Heaven Falling Down Elemental Cold The Big Chair Empire Building The Way You Are Sketches of Pain Secrets I Love You But I'm Lost The Marauders I Choose You Sorry Humdrum and Humble Call Me Mellow Pharaohs Me And My Big Ideas