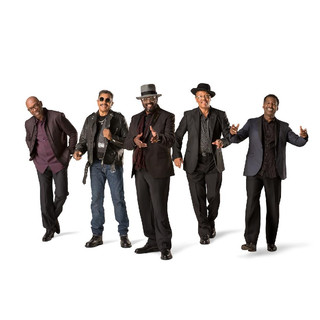 The Temptations may refer to at least two groups 1. The Temptations are an American Motown singing group whose repertoire has included doo-wop, soul, psychedelia, funk, disco, rnb, and adult contemporary. Formed in Detroit, Michigan in 1960 as The Elgins. The group, known for its finely tuned choreography, distinct harmonies, and stylish suits, has been said to be as influential to soul as The Beatles are to rock. Having sold an estimated 22 million albums by 1982, The Temptations are one of the most successful groups in black music history and were the definitive male vocal group of the 1960s. In addition, they have the second-longest tenure on Motown (behind Stevie Wonder), as they were with the label for a total of 40 years: 16 years from 1961 to 1977, and 24 more from 1980 to 2004 (from 1977 to 1980, they were signed to Atlantic Records). As of 2005, The Temptations continue to perform for Universal Records with only one original member, founder Otis Williams, in its lineup. Like its sister group The Supremes, The Temptations' lineup has changed frequently over the years. The original group included members of two local Detroit vocal groups: second tenor/baritone Otis Williams, first tenor Elbridge Bryant and bass Melvin Franklin from The Distants; and first tenor/falsetto Eddie Kendricks and second tenor/baritone Paul Williams (no relation to Otis) from The Primes. Among the most notable future Temptations were lead singers David Ruffin and Dennis Edwards (both of whom became successful Motown solo artists after leaving the group, as did Kendricks), Richard Street (another former Distant), Damon Harris, Ron Tyson, Ali-Ollie Woodson, Theo Peoples, and G.C. Cameron. Over the course of their career, The Temptations have released four number-one pop hit singles and 14 number-one R&B hit singles, and their material has earned them three Grammy Awards. Most of the early Temptations hits, including The Way You Do the Things You Do, My Girl, and Get Ready were written and produced by Smokey Robinson and other members of The Miracles, while composer/producer Norman Whitfield and lyricists Eddie Holland and Barrett Strong crafted most of the group's later hits, including Ain't Too Proud to Beg, I Wish It Would Rain, Cloud Nine, I Can't Get Next to You, Just My Imagination (Running Away with Me), and Papa Was a Rollin' Stone. 2. There was also a 50s doo-wop group from New York named the Temptations. They are best remembered for their 1960 top 40 hit Barbara. After this hit, lead singer Neil Stevens went solo. Read more on Last.fm. User-contributed text is available under the Creative Commons By-SA License; additional terms may apply.

My Girl Ain't Too Proud to Beg Get Ready The Way You Do the Things You Do Papa Was a Rollin' Stone Just My Imagination (Running Away With Me) I Can't Get Next to You Papa Was a Rolling Stone I Wish It Would Rain Papa Was A Rollin' Stone - Single Version Cloud Nine Just My Imagination Silent Night (I Know) I'm Losing You Ball Of Confusion (That's What The World Is Today) Beauty Is Only Skin Deep My Girl - 16 Big Hits Stereo Version Treat Her Like A Lady Shakey Ground You're My Everything Psychedelic Shack Rudolph The Red-Nosed Reindeer Since I Lost My Baby Masterpiece Ball Of Confusion It's Growing My Girl - Album Version (Stereo) I Could Never Love Another (After Loving You) Don't Look Back Runaway Child, Running Wild Get Ready - Album Version (Stereo) Ain't Too Proud To Beg - Album Version (Stereo) The Little Drummer Boy All I Need My Girl - Single Version (Stereo) Build Me Up Buttercup Girl (Why You Wanna Make Me Blue) My Christmas Tree Stand By Me I'm Gonna Make You Love Me Superstar (Remember How You Got Where You Are) The Girl's Alright With Me Angel Doll Sugar Pie Honey Bunch I Want A Love I Can See Law Of The Land Funky Music Sho Nuff Turns Me On Hey Girl (I Like Your Style) Treat Her Like A Lady - Single Version Let Your Hair Down