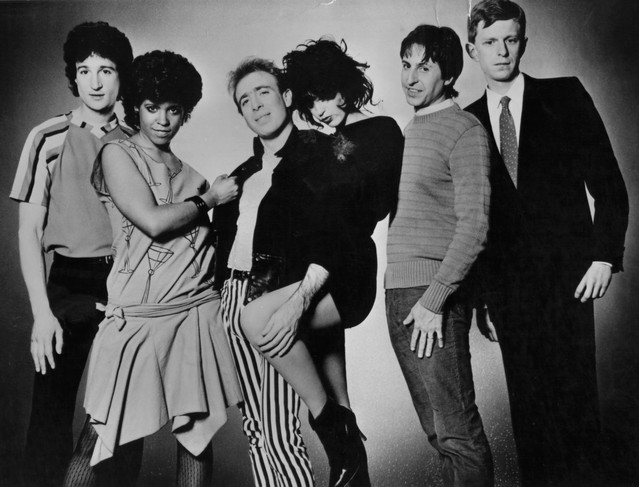 The Waitresses were a New Wave band which formed in Kent, Ohio, United States in 1978. In their best known lineup, the band consisted of Patty Donahue (vocals), Chris Butler (guitar, lyrics), Tracy Wormworth (bass), Mars Williams (saxophone), Ralph Carney (keyboards) and Billy Ficca (drums). The band released two albums before disbanding in 1984. The group was led by Chris Butler, although lead vocals were performed by Patty Donahue. Donahue died of lung cancer on December 9, 1996, at the age of 40. They are best known for songs I Know What Boys Like (featured on countless multi-artist compilation albums), Square Pegs (the theme song to the cult TV show starring Sarah Jessica Parker), and their Christmas song Christmas Wrapping. The latter was originally available on the Ze Records original collection 'A Christmas Record'. Considered to be a modern day Christmas classic, it has received more plays than any other Waitresses song. Chris Butler's diverse musical interests are apparent from the use of prepared piano on No Guilt, the micro-tonal background vocals on the chorus of Wise Up, and the tape loops and short wave receiver on Jimmy Tomorrow. As well, the title of track Make the Weather was taken from Hugo Ball's autobiography 'Flight out of Time'. The Waitresses explored various genres from pop to rock to jazz to blues and more. In terms of songwriting, some reviewers have compared Butler to Elvis Costello in terms of talent, both of them composing lyrics with both cynical bite and tunefulness. Though achieving some commercial success, the original Waitresses sadly only managed two full studio albums before folding. Bassist Tracy Wormworth went on to play with Sting, and she later appeared on television daily as she played in the house band for 'The Rosie O'Donnell Show'. Mars Williams has played saxophone with The Psychedelic Furs since the mid-80s. Billy Ficca, who was also a founding member of the band Television, returned to that band when they reunited in 1991. They released two full studio albums: 'Wasn't Tomorrow Wonderful' and 'Bruiseology'. Both titles have been out of print for many years and neither has ever been available on CD officially. Fortunately, their music has been available on compilations such as 'The Best of the Waitresses' (Polydor 1990), releases that have recived critical praise. Official Albums: 1981 - 'I Could Rule The World If I Could Only Get The Parts' 1982 - 'Wasn't Tomorrow Wonderful' 1983 - 'Bruiseology' 1983 - 'Make the Weather EP' 1990 - 'The Best of the Waitresses' 1997 - 'King Biscuit Flower Hour Presents The Waitresses' 2003 - '20th Century Masters: The Best of the Waitresses' The Waitresses released three singles: 1981 Christmas Wrapping from I Could Rule the World if I Could only Get the Parts (Latest known version on The Best Christmas Album In The World Ever.) 1982 - I Know What Boys Like from Wasn't Tomorrow Wonderful (23 on Mainstream Rock Tracks, 62 on Pop 100) 1983- Make The Weather (did not chart, but the video was played on MTV and is still played on Vh-1 Classic.) Band members included: * Patty Donahue (lead vocals) * Chris Butler (guitars) * Mars Williams (saxophone, reed instruments) * Billy Ficca (drums) * Dan Klayman (keyboards) * Tracy Wormworth (bass, background vocals) (mid-1982-83) * David Hofstra (bass) (1981-82) * Ariel Warner (background vocals) (1981-82) Read more on Last.fm. User-contributed text is available under the Creative Commons By-SA License; additional terms may apply.