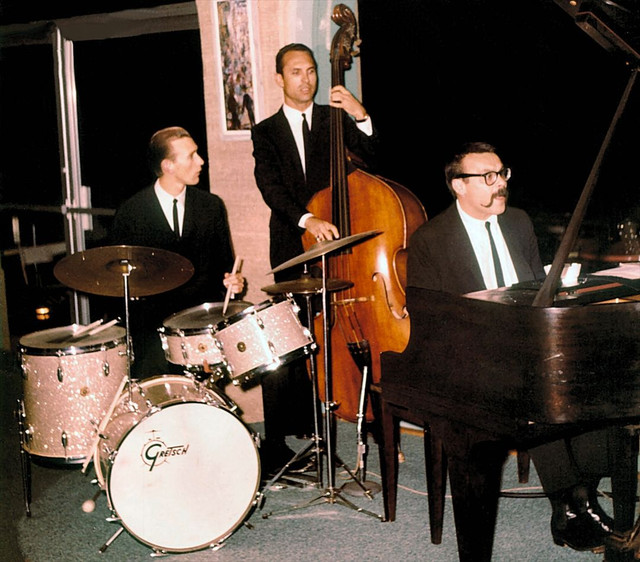 The Vince Guaraldi Trio was a jazz group fronted by pianist and composer Vince Guaraldi. Most well-known in its acoustic piano-drums-bass configuration, the trio provided music for a number of animated productions of Charles M. Schulz's Peanuts comic strips. Guaraldi's distinctively breezy, bluesy, and melancholy jazz has become an indelible part of Peanuts' timeless legacy. Their soundtrack for the 1965 Christmas special, A Charlie Brown Christmas, is one of the biggest-selling and most critically successful Christmas albums of all time. The San Francisco-based trio was first formed around 1954, then in a piano-guitar-bass configuration. Starting with the release of the group's self-titled debut album on Fantasy in 1956, Guaraldi would remain on the label for some time. Guaraldi's early recordings were decidedly low-key and morose compared to the work for which he would become famous, but his trademark melancholy and distinctive instrumental voicings, including his deep basslines, were indelible parts of his aesthetic framework from the very beginning. Influenced by the Brazilian film Black Orpheus (1959)--whose soundtrack was a large part of the impending Bossa nova craze--the trio recorded the album Jazz Impressions of Black Orpheus (1962), having by this point settled into their now familiar piano-bass-drums lineup. The album featured renditions of songs from the film, as well as a number of originals; one such song was Cast Your Fate to the Wind which would, within a year, become one of the most commercially successful jazz instrumentals of its time, notably winning a Grammy for Best Instrumental Song. Several vocal versions (with lyrics by Carel Werber) would also achieve significant success. It was thanks to Guaraldi's hit song that he was discovered by Lee Mendelson who wanted him to write music for Peanuts animation. Guaraldi's first Peanuts assignment was the music for the ill-fated Schulz documentary A Boy Named Charlie Brown. Though the special was never aired and remained unavailable to the public for several decades, the music was released as the album Jazz Impressions of A Boy Named Charlie Brown (1964). For later reissues, the album was retroactively renamed after the documentary. Despite a troubled production process, 1965 saw the premiere of A Charlie Brown Christmas. Guaraldi's ground-breaking amalgamation of Christmas music and his own unique brand of jazz was an inexorable part of the special's unforeseen success; the soundtrack, featuring originals alongside Guaraldi's interpretations of standards, continues to amass impressive sales even now. One of the songs from the special, Linus and Lucy (featured in the special's famous dancing scene), would become the de facto theme of Peanuts animations, often mistakenly referred to as the Peanuts Theme. Another song on the soundtrack, Christmas Time Is Here (with lyrics by Mendelson), has become a Christmas standard in its own right. With the passing of the '60s, Guaraldi began experimenting more and more with different sonic textures for his music, having all but replaced his acoustic piano with various electronic keyboards, most notably the Fender Rhodes. Consequently, Guaraldi would, less and less, perform and record within the context of a trio. While it was never officially disbanded, and Guaraldi still used this configuration from time to time, the group inevitably dissolved upon Guaraldi's untimely death in 1976. Peanuts specials made subsequent to his death often reuse Guaraldi's recordings, or original music inspired heavily by Guaraldi's iconic scores; a testament to his importance to the identity of Peanuts. More importantly, generations of people have cited Guaraldi's inventive and playful jazz as their formative experience with the genre, imbuing a spark of the love of jazz in untold numbers of listeners that only seem to increase the more time goes by. Read more on Last.fm. User-contributed text is available under the Creative Commons By-SA License; additional terms may apply.