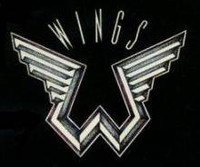 Three bands are known to have used the name Wings, one from UK, the others from Malaysia and Finland. A duo in Korea is also using the name Wings (윙스). 1. Wings (also known as Paul McCartney & Wings) from UK. Late in 1971, drummer Denny Seiwell, and ex-Moody Blues guitarist and singer Denny Laine, joined Paul McCartney and wife Linda McCartney to record Paul McCartney's third post-The Beatles project. The result was Wild Life, the first project to credit Wings. In early 1972, Paul McCartney added ex-Spooky Tooth guitarist Henry McCullough and returned to touring, mounting an impromptu tour of UK universities and later a tour of small European venues (with the group driving around in a van), playing no The Beatles numbers. He scored hits with the relatively light singles Give Ireland Back to the Irish (banned by the BBC for its political stance, and only mentioned in chart rundowns on Radio 1 as 'a record by Wings'), Mary Had a Little Lamb, and Hi Hi Hi (again, banned by the BBC for alleged drug and sexual references). In 1973, Paul McCartney re-christened the band Paul McCartney and Wings for the album Red Rose Speedway in order to make the record more commercial. Following the release of Speedway, Denny Seiwell and Henry McCullough left the band, leaving the McCartneys and Denny Laine to cut their next album at EMI's recording studio in Lagos, Nigeria, recording what turned out to be their breakthrough album, Band on the Run. After this, Jimmy McCulloch and Geoff Britton, lead guitar and drums respectively, joined the band, now named Wings again. The first recording session with the new members was held in Nashville and produced the rocky non-album single Junior's Farm. The new lineup then moved to New Orleans to create the album Venus and Mars (1975), followed by a return to Nashville for Wings at the Speed of Sound (1976); both albums took top chart positions. During the recording for Venus and Mars, Joe English replaced Britton on drums. Speed of Sound represented a substantial departure from the Wings template in that each member of the band sang at least one song, including Linda (Cook of the House). The success of both Venus and Mars and Wings at the Speed of Sound led the members of Wings to go on tour in a tour called Wings Over The World. The tour lasted from 1975-1976 and had Wings touring England, Europe, Australia, and the United States. A live album called Wings Over America was released with songs taken from various live shows across the America leg of the tour. Hoping to make 1977 a similar year to 1976, Wing regrouped to record some tracks at Abbey Road Studios, however, the sessions were stopped when Linda McCartney found out she was pregnant with her 4th child. With time on their hands, Wings found themselves recording on a yacht called Fair Carol. As Linda's pregnancy progressed, the sessions were halted. During this time, both Jimmy McCulloch and Joe English left Wings, leaving the band to just the core trio. That November, Wings released Mull of Kintyre backed with Girl's School. The single became the U.K.'s most sold single, even surpassing [artitst]The Beatles She Love's You. After Linda's pregnancy, the core of Wings finished the album London Town, which spawned the hit With A Little Luck. McCartney then added guitarist Laurence Juber and drummer Steve Holly to the Wings line up. The new line up only made one album, Back To The Egg. Compared to the other Wings albums, Back To The Egg was a commercial failure, reaching #8 on the Billboard 200. Wings then commenced a short tour across Europe to promote Back To The Egg at the end of 1979. A tour of Japan was canceled after McCartney's drug bust at the Japanese Airport. McCartney then released McCartney II without Wings, and when John Lennon was murdered, McCartney refused to tour for his safety. Paul's reluctance to tour was Denny Laine's reasoning to quit Wings and Wings disbanded in early 1981. According to the excerpts above, the only albums credited to Paul McCartney & Wings are Red Rose Speedway (1973) and Band on the Run (1973). 2. Wings: A Rock band from Malaysia. Their history began on the establishment in 1985 the Secondary School Sri Ampang in Kuala Lumpur. There, four young men who are still demanding joined forces to form a school band. As motivated and very interested in Rock music, especially rhythm, they agreed to singing rock'n'roll participating during their presentations. When it began the birth of WINGS although this group has no name. Wings' original members are Awie, Jojet, Jo and Sham. The break-hit group when Jojet migrate to GERSANG while Arid and Jo resigned. While Syria set up new groups, named Group CRK. More info at http://ms.wikipedia.org/wiki/Wings Band consists of : Vocalists: 1) Awie (Ahmad Azhar Othman) 1985 - 1993. 2002 - Now 2) Mel (Ismail Zainuddin) 1995 - 1996 3) Mus (Mustafa Din) 1996 - 2001 Guitarists 1) Sham (Sham Baharom) 1985 - 1987 2) Tham Wing Kwan 1987 3) Joe (Abdul Zamin bin Abdul Kadir) 1988 Bassist Eddie (Samsaidi Haji Ulong Idris) 1985 -Now Drummer 1)Black(Azmi Hashim) 1985 - 1990. 1994 - Now 2) Jojet 1990 - 1993 3. Wings was also a Finnish death metal band which started in the early 90’s as a side project of Cartilage’s Gabriel Suoraniemi. This incarnation of Wings released a demo and a 7’‘EP. In 1994 Suoraniemi found a full line-up and the style changed to a more modern direction. They released one demo and a full-lenght album through Woodcut Productions (run by Suoraniemi’s ex-Cartilage comrade Mikki Salo) before splitting up. Most of the Wings line-up played in Enochian Crescent as well. Read more on Last.fm. User-contributed text is available under the Creative Commons By-SA License; additional terms may apply.